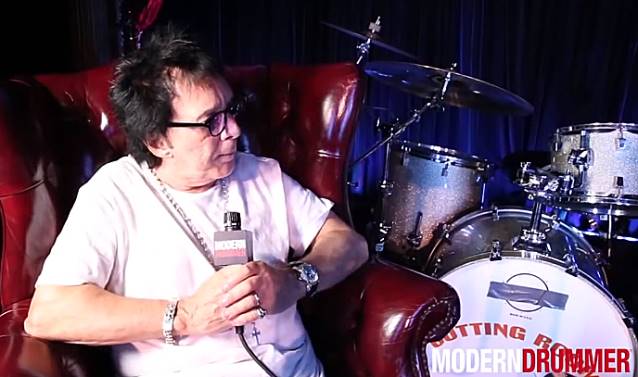 In part one, Peter watches a never-before-shown video that former WHITESNAKE drummer Brian Tichy — a lifelong KISS fan since he first picked up drum sticks — made just for him. You can see Peter was very touched by the sentiment. Also, Robin Diaz, DAUGHTRY drummer and another huge fan of Peter's, texts in a question.

In part two, Peter talks about KISS' album "Destroyer", released in March of 1976, and helmed by legendary producer Bob Ezrin. The LP became the band's most commercially successful studio effort due to Criss' ballad "Beth", the B-side of "Detroit Rock City". The hit single became the band's first Top Ten hit, won a People's Choice award, and went triple platinum. On February 18, 1977, the New York-based band made its Madison Square Garden debut — a dream come true for Peter, as he explains in part three.

KISS fans are up in arms over Gene Simmons and Paul Stanley's announcement that no members of KISS will be playing at the April 10 Rock And Roll Hall Of Fame induction ceremony in Brooklyn. The statement came on the heels of Ace Frehley explaining to fans that neither he nor Peter Criss are invited to play with Simmons and Stanley.

Gene Simmons and Paul Stanley have chosen to have the rest of the current KISS lineup — guitarist Tommy Thayer and longtime drummer Eric Singer — dress up as Criss' and Frehley's respective "spaceman" and "catman" personas. The Pulse Of Radio asked Simmons what it feels like to turn around and see the spitting image of his former bandmates — yet it's someone else. "Y'know, we still have a tug of the heart," he said. "It's like your drunken dysfunctional father who was a bum and you finally had to get rid of him — but you still remember the beginning when he was a good dad. Ace and Peter are beloved, as they should be, for the beginning. For helping launch the band — if you don't mind me saying so — that changed the face of rock 'n roll, literally and figuratively speaking. But equally as important part of the beginning of KISS, it's also important to know that with them in the band today, KISS wouldn't be around."