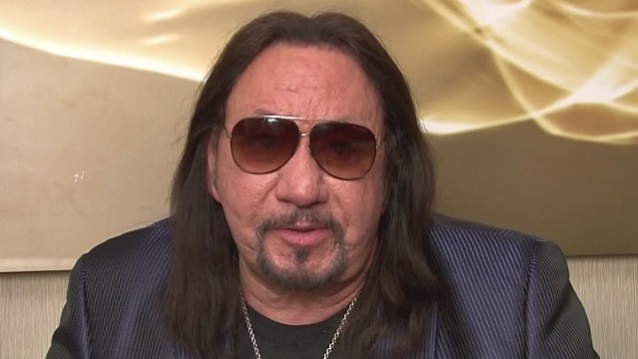 Rodney Holder of Australia's Music Business Facts recently conducted an interview with original KISS guitarist Ace Frehley. You can now listen to the chat using the audio player below. A few excerpts follow (transcribed by BLABBERMOUTH.NET).

On what music business advice he would give to young musicians"

Ace: "Practice, practice and more practice. And never give up; persevere. There were plenty of times when I was younger, thinking about… I just never gave up. I always believed that even if I wouldn't have joined KISS, I would have joined another supergroup and made it."

On how he deals with the business side of making music:

Ace: "I hate the business end of it. I always have. I hate dealing with attorneys and I hate paperwork; it just jams up my head. My brain works with creativity. When it comes to dollars and cents, and reading contracts, it jams me up and it hampers my creativity. So I try to shy away from that and give those tasks to people that I trust… I have a real good attorney, and a good assistant. And I'm real happy with the new lineup I have. This new band is great. We completed a successful American tour. Next we're going down to Australia, and then in June we're headed off to Europe. So I've got my fingers crossed. So far so good."

On the mistakes that he made along the way:

Ace: "Everybody makes mistakes. You learn from your mistakes. People say to me, 'Why did you call your book 'No Regrets'?' And I said, because, pretty much, I believe in my heart that I had to make all the mistakes that I've made to get to where I am today. So I don't really regret any of the mistakes I've made; it was a learning process. It goes along with the territory."

On when KISS first became a business:

Ace: "All the makeups for each character are trademarked; they were trademarked many years ago. And my attorney told me that I license my makeup to KISS and they pay me a royalty for that… I license it to [KISS leaders] Paul [Stanley] and Gene [Simmons], so they can do whatever they want with it, as long as they pay me. So… it is what it is. It's not the best situation, but… you know… Like they say, there ain't nothing like the real thing, so…"

On the changes in the music business since KISS first started out forty years ago:

Ace: "When KISS became millionaires, the music business was so different back then. We became millionaires in the late '70s. Now it's maybe not as easy as it was back then. Or maybe it was just as hard; it's just that we were in the right place at the right time. I don't know… It just seemed like back then, in the '70s, there weren't as many bands as there [are] today. I would imagine, though, today the competition is a little more fierce."