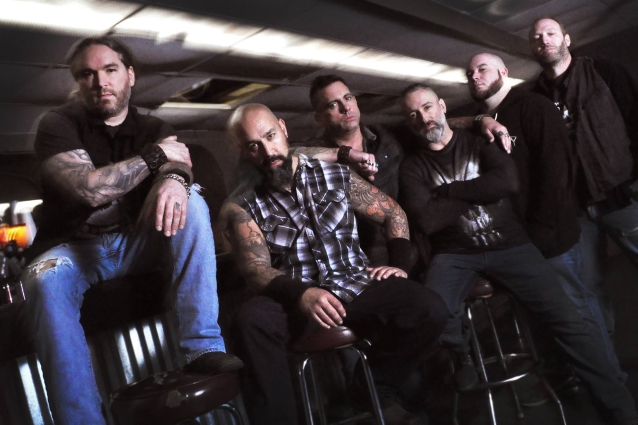 Original Lineup Of BRAND NEW SIN To Reunite For May Concert

The original six-piece lineup of Syracuse, New York-based heavy rockers BRAND NEW SIN will reunite for a sold-out hometown concert at the Lost Horizon on May 4, 2019.

BRAND NEW SIN was formed in the early 2000s after members of the metalcore band GODBELOW joined forces with vocalist Joe Altier. The group's self-titled debut album — their only release to feature the six-member lineup that included three guitarists — was originally released in 2002 by Now Or Never Records.

In 2004, the band signed with Century Media Records, which released BRAND NEW SIN's sophomore album, "Recipe For Disaster", the following year. Their third album, "Tequila" — which was produced by Joey Z (LIFE OF AGONY) and featured a guest appearance by late TYPE O NEGATIVE vocalist Peter Steele — followed in 2006.

That same year, the group recorded a rendition of "Crank It Up", the entrance theme music of the World Wrestling Entertainment professional wrestler known as The Big Show. The song continues to be used by WWE a dozen years later.

In 2008, Altier left BRAND NEW SIN to begin a successful career as an in-demand "piano man" who performs regularly in upstate New York under the moniker JUST JOE. The group carried on, self-releasing their fourth album, "Distilled" — which featured guitarist Kris Wiechmann (ex-EARTH CRISIS) taking over on lead vocals — in 2009. A fifth album, "United State", arrived in 2011 via Goomba Music.

According to a post on the band's Facebook page, the Lost Horizon concert will see the group perform "a huge set featuring songs from the entire BRAND NEW SIN catalog." A subsequent post made on December 15 following the reunited group's first rehearsal noted that they "cranked through 15 songs, including the entire first album."

"It felt great, sounded good and brought back a lot of great memories," the band wrote. "We can't wait for May!"