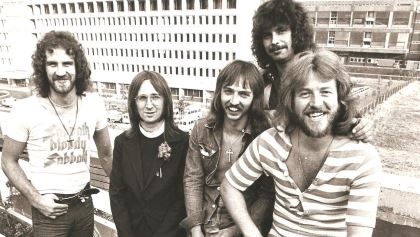 The band issued the following statement: "It is with heavy hearts, much sadness, sorrow and regret that we announce the passing of our very dear dear friend and original founder band member Mike 'Taffy' Taylor. Our thoughts and deepest sympathies and condolences go out to his family and to all who were lucky enough to have met and known him. LEGEND."

Over their career QUARTZ toured heavily — playing the Reading Festival three times ('76, ''77 and '80) — and touring as support to the likes of UFO, IRON MAIDEN, SAXON, GILLAN and RUSH.

Taylor's last album with the band was 1980's sophomore effort, "Stand Up And Fight", featuring the singles "Stoking Up The Fires Of Hell" and the title track.

In the summer of 1981, Taylor left QUARTZ to focus on his own project TAFFY TAYLOR’S BIG ROLL BAND.

Reformed without Mike Taylor in 2011, QUARTZ will release its fourth full-length studio album, "Fear No Evil", on October 28 via High Roller Records.

It is with heavy hearts, much sadness, sorrow and regret that we announce the passing of our very dear dear friend and...