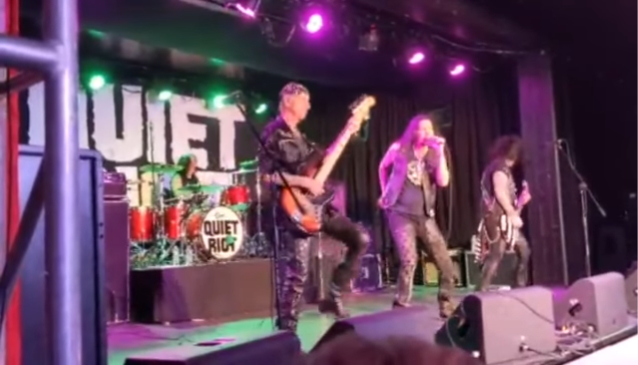 Kelly Garni, original bassist and founding member of QUIET RIOT, joined the current version of the band on stage this past Friday (December 31) at Fremont Country Club in Las Vegas, Nevada to perform the classic song "Slick Black Cadillac". Video of his appearance can be seen below.

Two days prior to the gig, Garni took to his personal Facebook page to write: "Here's what I'm doing NYE. For the first time in 43 years, I will be doing a song with QUIET RIOT! I am very excited about it and hope to see many of my Vegas friends! And, you can't beat $30 to do anything in Vegas on NYE! Come on down and help me bring in the new year! Be advised: if you comment with any of that shit about 'this isn't really QR,' you will be GONE as soon as I see it. Besides, Rudy's back. Ain't that enough?"

A day after the show, he returned to his Facebook to share the above-mentioned video and he wrote in an accompanying message: "Last night was unbelievable! A big thanks to my QUIET RIOT family for having me and making me feel so welcome!"

Garni is best known for playing with Randy Rhoads and Kevin DuBrow in QUIET RIOT and playing on the two Japanese releases "Quiet Riot" (1977) and "Quiet Riot II" (1978).

Three years ago, Garni told The Metal Voice that he was fired from QUIET RIOT in 1978 after he shot a gun through the ceiling during a "big drunken plan" to kill DuBrow.

"People say I tried to kill Randy Rhoads with a gun," he said. "People call me out on that one all the time and I almost got into a fist fight with Ozzy [Osbourne] about it. Nothing could be further from the truth."

He continued: "When it comes to Randy, everyone thinks he was so angelic. Well, we used to go out and shoot guns all the time. One time the S.W.A.T. team was called at my house because we were firing guns off in my backyard. What happened was I had robbed a bar the night before and stolen all their liquor and I was very drunk. That's why Randy was at my house, because we were drinking and we were drinking for about six hours straight."

Garni went on to say: "Randy and I had an argument over whether we should kick out Kevin DuBrow from QUIET RIOT. People say that during that fight I tried to shoot Randy Rhoads and that is not true. I fired a bullet through the ceiling. The bullet went nowhere near Randy Rhoads and in no way would I ever try to kill my best friend. And yes, a pretty good fist fight happened — a rather violent one. Randy left my house bleeding pretty badly and so did I. But that is what friends and brothers do is they roll around the ground, beat each other up and that's all it was."

The fight resulted in Garni's dismissal from the band. "I was kicked out of QUIET RIOT because of this," he said. "I have no problems saying that. Once I started to pull a gun out, the management said, 'He is out of control,' which I agree to that decision that they made and have no issues with. I deserved to get fired from QUIET RIOT — totally deserved it."

Garni released his autobiography, "Angels With Dirty Faces", in 2012. A press release at the time described the book as "a very heartfelt and earnest look" at Kelly's life and music and said it offered an "all-access pass" into every corner of his world, including his lifelong friendship with Rhoads.

Last night was unbelievable! A big thanks to my Quiet Riot family for having me and making me feel so welcome! 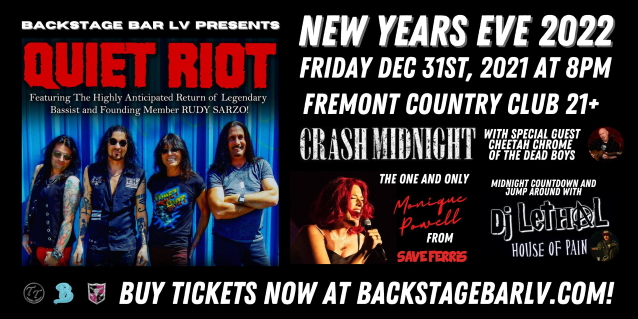