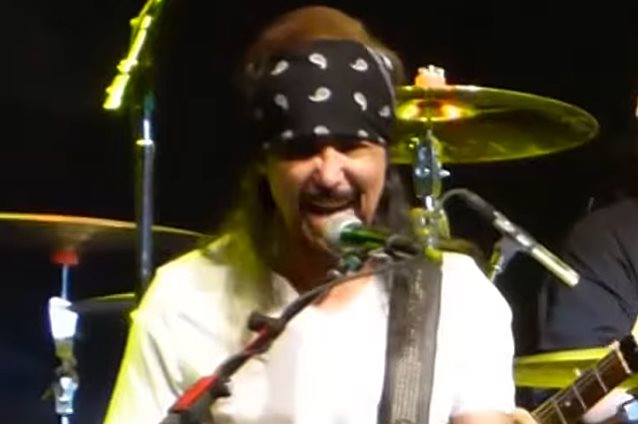 Original Y&T rhythm guitarist Joey Alves has died. He was 63 years old. His passing leaves frontman Dave Meniketti as the only surviving member of the Y&T lineup — then known as YESTERDAY AND TODAY — that recorded the band's self-titled debut album.

Two founding Y&T musicians — drummer Leonard Haze, 61, and bassist Phil Kennemore, 57, who both had left the lineup — died from complications of lung cancer: Kennemore on January 7, 2011, and Haze on September 11, 2016.

The news of Alves's passing was broken by Meniketti on Facebook. He wrote: "It's with great sadness that I write this today. Y&T's original rhythm guitarist, Joey Alves, passed away at 7:10 this morning. He suffered from ulcerative colitis and other complications that led to his passing.

"Joey was one of the finest rock rhythm guitarists, and I'll always remember playing next to him chunking out those monster chords with his classic red double cutaway '59 Les Paul Jr.

"As Ronnie Montrose once said about Joey, 'There are rhythm players, then there's Joey. A class of his own.....'

"He was a fun guy who always played with attitude and conviction, and was responsible for writing some memorable riffs for Y&T over the years. His friendship and presence will be missed.

"This is a great loss for all the Y&T family and faithful. He now joins Phil and Leonard in rock and roll heaven."

Speaking about Kennemore and Haze's absences, Meniketti told the Stockton Record back in January: "It was incredibly disheartening and emotionally wrenching. Anything I can say just doesn't come up to describing it. When you lose your best buddy [Kennemore] you've been standing next to for 37 years, the best word is 'time.'

"You come out of it. When you've gone through all those hard times so often, losing him — on all of us — was not an easy thing. His spirit's still here. Regardless."

As previously reported, Y&T is putting the finishing touches on its documentary, "On With The Show", to be released before the end of the year. The film is expected to be built out of the hundreds of hours of personal footage shot over the years. It is set to cover the band's earliest days of rehearsing in Haze's grandmother's house, then move through the first two albums, touring with JOURNEY, BOSTON and QUEEN, to their big breaks with AC/DC, OZZY OSBOURNE and DIO.

It’s with great sadness that I write this today. Y&T's original rhythm guitarist, Joey Alves, passed away at 7:10 this...