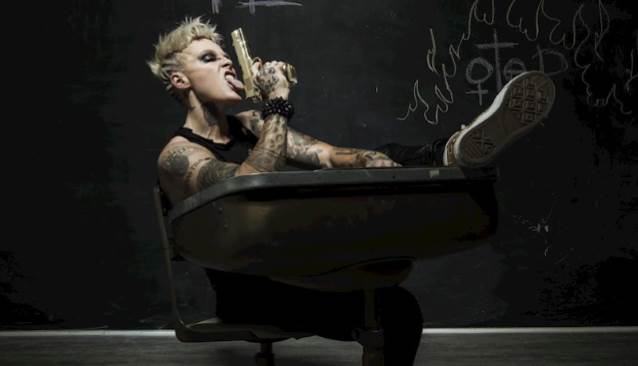 OTEP's lyric video for the anti-hate group, Nazi-stomping anthem "Molotov" can be seen below. The song is taken from the band's most uncompromising, candid, all-inclusive and controversial assessment of the current residing political regime that it has ever released — the new album "Kult 45".

Throughout the span of her career, OTEP frontwoman Otep Shamaya has been an undeniable force in bringing awareness via various acclaimed mediums to social and political injustices felt by various communities and subcultures. For years, publications such as Revolver magazine have lauded Shamaya for "following in the footsteps of outspoken musicians from folk singer Woody Guthrie to RAGE AGAINST THE MACHINE's Zach de la Rocha, dubbing her "one of music's catalysts for social change". So, with the political climate as it is today, it's prime time for OTEP to make their voices heard in their primary medium — song.

Shamaya explained that "Kult 45" is the most authentic album OTEP has ever released, at least since their first record, and producing it themselves helped achieve this result. "We had the freedom to be able to write, record and exist within the songs on 'Kult 45'," she said. "Things needed to be said and songs needed to be written that reflect the times. We weren't under anyone else's agenda, there was no pressure to create a 'single' or a song for radio, and the band was really able to shine."