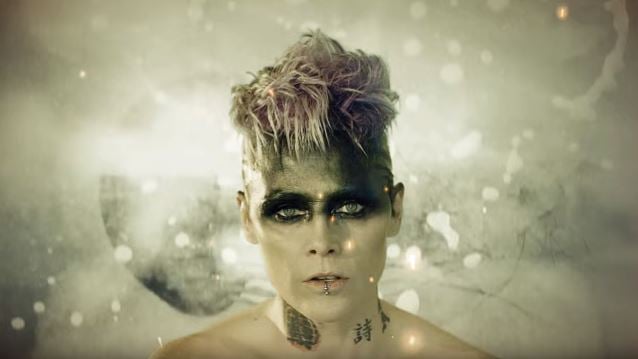 OTEP, the band led by singer, poet, illustrator, author and activist Otep Shamaya, is about to unveil the most uncompromising, candid, all-inclusive and controversial assessment of the current residing political regime that it has ever released in the form of its eighth full-length album, titled "Kult 45". Drawing influences from politically charged recording artists of the past but allowing her artwork to remain fully and undeniably OTEP, Shamaya continues her nearly two-decade invasion of the senses on July 27 when "Kult 45" drops via Napalm Records. This is OTEP like you've never heard them before.

"Kult 45" is available for pre-order now exclusively via the Napalm Records online store, and will be available in CD (jewel case) format with bonus tracks and vinyl format in black, as well as individual red and gold vinyl colors (each Napalm Records exclusives). Digital pre-orders will become available soon.

"Shelter In Place" investigates the topic of school shootings, specifically. "This song is extremely important to me because it was inspired by the bravery of those Parkland students who formed the March For Our Lives," says Shamaya. "The outro is, 'hey hey NRA, how many kids did you kill today?' because they've actively taken measures to make our kids less safe in school. They want to arm teachers, they want to put more guns in schools and on the street. The song itself isn't specifically anti-gun, but aimed at the hypocrisy of the NRA and certain belief systems that lose sight of what's truly important — the lives of our children."

OTEP will go out on a headline tour supporting "Kult 45", beginning July 5 in Las Vegas, Nevada at the Hard Rock Hotel And Casino. The tour will run for nearly a month and a half, coming to an end in Ventura, California on August 18.