Legendary New Jersey thrashers OVERKILL have announced the "Wings Over USA" 2020 tour. Kicking off on February 26 at the House of Blues of Anaheim, the 17-date trek, which will feature special guests EXHORDER and HYDRAFORM, will make stops in Las Vegas, New Orleans and Atlanta before concluding in New Jersey. The final date will welcome M.O.D. featuring Billy Milano and DEMOLITION HAMMER.

OVERKILL singer Bobby "Blitz" Ellsworth comments: "Let's get this show on the road, 'Wings Over The USA', round two! We are bringing two heavy hitters with us, EXHORDER and HYDRAFORM, in what will shape up to be a sledgehammer-thrash fest. Looking forward to seeing you all! Horns up!"

Tickets for the tour will go on sale this Friday, December 20 at 10 a.m. local time.

OVERKILL is continuing to tour in support of its 19th studio album, "The Wings Of War", which was released in February via Nuclear Blast. The disc was recorded at Gear Recording Studio in New Jersey, SKH Studio in Florida and Jrod Productions with engineering handled by bassist D.D. Verni and guitarist Dave Linsk. The album was produced by the band while Chris "Zeuss" Harris took care of the mixing and mastering. Travis Smith (NEVERMORE, OPETH, SOILWORK, DEATH) was again enlisted to create the artwork for the album. 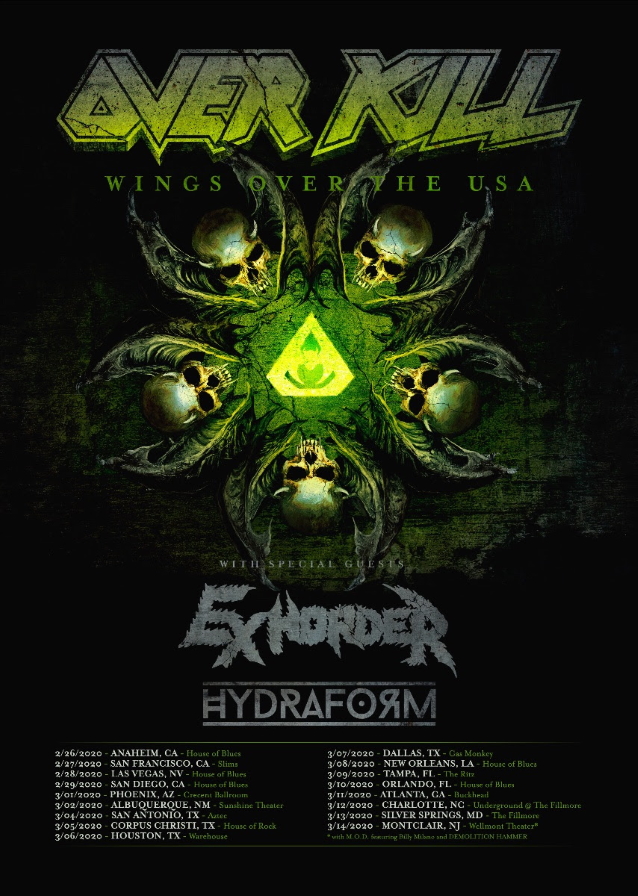