Brazilian/American metallers SEPULTURA have announced a North American tour in support of their upcoming album, "Quadra". The 29-date tour kicks off at the San Diego House Of Blues on March 18 and will make stops in Denver, Brooklyn and Atlanta before ending on April 22 in Ventura, California. Joining the band as special guests are SACRED REICH, CROWBAR and ART OF SHOCK.

SEPULTURA vocalist Derrick Green states: "We're extremely excited about kicking off the first part of our tour in support of our new album, 'Quadra', in North America. This is going to be a show that you do not want to miss! We look forward to seeing everyone there!"

Guitarist Andreas Kisser adds: "I couldn’t be happier with this announcement! Touring with our brothers from SACRED REICH again is unbelievable. We are going to repeat a successful package that we shared so much in the '90s plus the heavy energies from our legendary friends from CROWBAR!. Wow!!! Expect jams and good vibes! See you all soon on the 'Quadra' North American tour 2020!"

"Quadra" is a treasure chest of hidden meanings, the beginning of a new era and a space with its own rules, its own definitions and its own reality. The LP will be released on February 7, 2020 via Nuclear Blast. 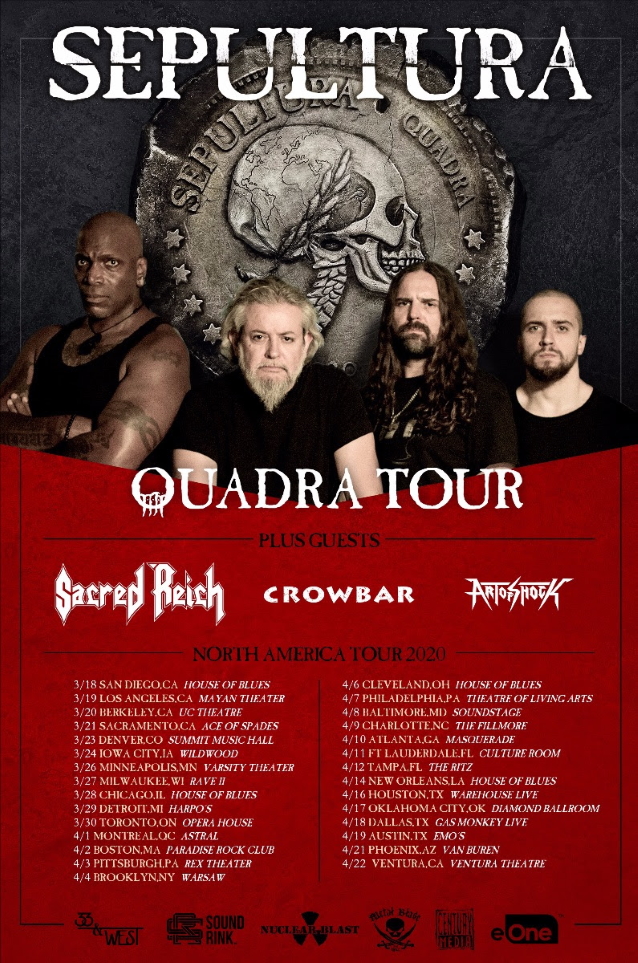