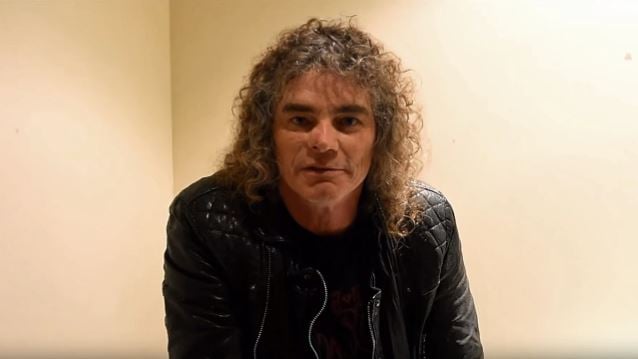 Emily Strigl of the "Talking Metal" podcast recently conducted an interview with OVERKILL vocalist Bobby "Blitz" Ellsworth. You can now listen to the chat using the Spreaker widget below. A couple of excerpts follow (transcribed by BLABBERMOUTH.NET).

Bobby: "The great part about a new album is that it's a new opportunity. Somewhere inside ourselves, we're OVERKILL and we think, 'Here we go with our chance to take over the world.' It's a motivating factor; it's not just another record. It's a new record, that's what makes the difference. It's our best foot forward thinking about a project. You get a band that is based on the history of metal, but you also get that excitement which gives us a current or modern day viability or value in the present day. This is what our key to success is in recording this many records."

Bobby: "It's necessary to stay current with what's going on, let's say, 'teach the old dog new tricks.' We've been in tune and in touch with the technology with regard to its invention. The idea for us about being a band, our social media in the old days was shaking hands and wearing out the soles of our sneakers handing out flyers. If you can still have that principle instilled, when it comes to making music that it is a social event for the five of us being in a room, you'll have great success. It's a confirmation of us as a band, as opposed to individuals."

Bobby: "It's funny, I was on MTV about 25 years ago and they asked the question, so I said, 'We're like Irish Catholics. Every nine months. We're like clockwork.' I think it's work ethic. We're happier with what our tools are. We're not artists, we're more of these blue-collar guys who are craftsmen. If you're happy with what your tools are as opposed to wondering why the world doesn't accept your genius, then you can get some pretty good results with your nose to the grindstone, making it happen, forcing the issue. I think that's always been our principle. We look at this as we're in the fight. If you stop fighting, you lose. Somewhere in there is a hidden principle in us that makes music come out with current day value, and quite regularly. If you think you're in the fight, you go in the fight to win the fight. You don't go in to lose. You go in to win. When that becomes part of the forethought, you're always putting your best foot forward. One of the proudest things for me with regard to this band is, under the circumstances, every time whether it be live or in the studio, we've done the best we could, or exceeded that in some cases because of the stars lining up or everyone giving that extra percentage. There is such a thing as 100 percent, but there's that little extra whether you equate to an athlete or a job. That's one of the things I'm most proud of, and because of that, you get some good results."

On "Taking Over" being an influential thrash album:

Bobby: "It was unique for us. This was our second record. You gain a ton of experience from record one to two. What we did realize is that we wanted to create a signature sound, which was a wall of guitars. That was the only precursor when we went into the studio. I remember that between the first and second record, on a personal level, I had started developing polyps on my vocal cords. It's like a wart or abrasion, then it can develop into nodes which can shut you down if you're not singing right. I started singing lessons to start singing correctly and when the polyps went, I started singing differently on 'Taking Over'. For me, that was one of the noticeable differences between the two records. That wall of guitars and the vocals, even though the music was heavier, the vocals are cleaner because of the vocal situation."

On his interactions with MOTÖRHEAD frontman Ian "Lemmy" Kilmister:

Bobby: "We did a triple bill across the U.S. which was SLAYER, MOTÖRHEAD and OVERKILL, and I think the record they were doing was '1916'. It was when they had two guitarists, Phil Campbell and Würzel [Michael Burston], and Lemmy, obviously, and [Phil] 'Philthy Animal' Taylor on the drums. Through the years I'd run into these guys. Würzel had left and Mikkey Dee had come in on drums and Lemmy would still remember your name: 'Hey, Bobby Blitz, how are you? Or, 'Hey, Bobby Blitz, stop into my dressing room.' A lot of my memories with him are personal, but this one was public: In 2008, touring with them through Europe. We were in Germany on the last show, and my light guy, Big Eric, says, 'Lemmy wants to see you for a few minutes.' He goes to me, "I want you to sing 'Overkill' with me tonight.' I go 'Fuck. This is going to be great.' I know the song cold, but I was nervous, now I'm doing it with the guy who wrote the song. I wrote the first word of each verse on my forearm. Once you have the first verse, you're in. Sure enough, he catches me in the middle of the song and yells right into my microphone: 'Cheat notes!' in front of 10,000 crazy MOTÖRHEAD bangers in Berlin. I totally panicked and dived into the audience. He's looking over at me and still to this day, I can see his toothy grin mouthing the words 'Cheat notes!'"

OVERKILL will release a brand-new single called "Our Finest Hour" the first week of their European tour on November 4.

"Grinding Wheel" is scheduled for a February 2017 release. 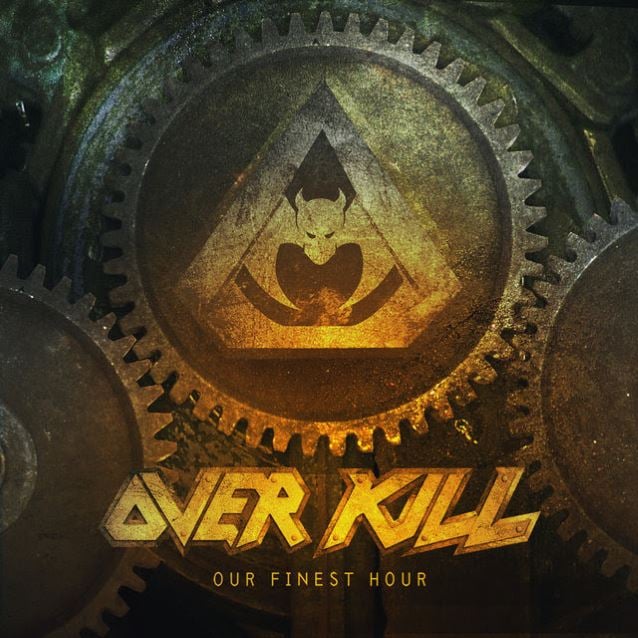