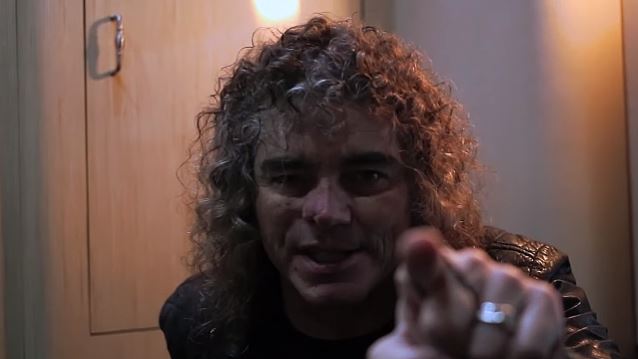 OVERKILL Is Aiming To Release New Album In October 2016

On October 17, Metal Mark of SkullsNBones.com conducted an interview with vocalist Bobby "Blitz" Ellsworth of New Jersey thrash metal veterans OVERKILL. You can now watch the chat below.

Asked about OVERKILL's timeline for the follow-up to 2014's "White Devil Armory" album, Ellsworth said: "We're shooting for October of 2016; I mean, that's our release date time. We're gonna start demoing stuff come early next year. We're gonna go to South America first, 'cause we just like doing that; I mean, it's just fun, it's off the hook down there. Then we have a tour through the U.K. and one special show we're gonna do in Germany. But, during that process, stufl will be recorded and written and re-written. So it's never this distinct timeline process for us. It's kind of us saying, 'Okay, let's start,' and then all the shit we've collected since 'White Devil Armory' starts showing itself, starts coming out. We planted the seeds, and now you see the leaves coming out of the ground. So it's not gonna be that hard process. I mean, it's not gonna be ever talk. It's just gonna be action versus reaction, like many OVERKILL records. I can't tell you it's gonna be the best thing since canned beer or sliced bread; it's just gonna be OVERKILL."

Ellsworth also talked about OVERKILL's longevity. He said: "This shit has transcended generation after generation after generation, and not on a large level. You get the masses in here, and the masses pollute it, you know what I'm saying? 'Who peed in the gene pool?' kind of a thing, you know? But I do think the idea is that when you can actually have a father, son, grandpa, or father and daughter listening to this stuff and saying, 'This is what it's all about,' for us, that's something that's pretty special. 'Cause we're metalheads before we're OVERKILL, you know what I mean? That's why it kind of works for us; we have the right priority there. So we appreciate, obviously, the support, but we're also supporters of such. So maybe that's the key to this — don't have that identity crisis, and be one of the dudes."

OVERKILL's first worldwide release on Nuclear Blast was a special box set comprised of the band's entire back catalog, made available on September 18. Titled "Historikill: 1995 - 2007", it contains 11 OVERKILL albums on 13 CDs and a bonus CD (containing demos, remixes and an unreleased cover song) in digi sleeves.

OVERKILL and SYMPHONY X recently joined forces for a North American tour. The 24-date co-headlining trek launched at The Palladium in Worcester, Massachusetts on September 18, and wrapped with a very special night at Terminal 5 in New York City on October 17 — the first time in the bands' combined histories that they played a show together in their own backyard.

"White Devil Armory" sold around 8,400 copies in the United States in its first week of release to debut at position No. 31 on The Billboard 200 chart. The CD was released on July 22, 2014 in North America via eOne Music and on July 18, 2014 in Europe through Nuclear Blast Records. The effort was tracked at Gear Recording and was mixed by Greg Reely, who also worked on 2012's "The Electric Age".