New Jersey thrash metal veterans OVERKILL recently inked a new worldwide deal with Nuclear Blast Records. Previously signed to the label for Europe only, OVERKILL's first worldwide release on Nuclear Blast will be a special box set comprised of the band's entire back catalog, due out on September 18. Titled "Historikill: 1995 - 2007", it will contain 11 OVERKILL albums on 13 CDs and a bonus CD (containing demos, remixes and an unreleased cover song) in digi sleeves.

The bonus CD will include the following songs:

The complete track listing can be found at NuclearBlast.de.

In a behind-the-scenes interview with VH1 Classic's "That Metal Show", OVERKILL singer Bobby "Blitz" Ellsworth stated about the band's upcoming retrospective package: "The OVERKILL box set is remasters from that center section; it's not the Atlantic and the major-label stuff. It's everything that followed it up until 2007. So let's say, pre-'Immortalis' [2007], pre-'Ironbound' [2010], and after the Atlantic years. So '96 through 2007 — 11 years. I think there's nine records, including live records, in there."

He continued: "[There are] some interesting things [in there], because it wasn't the most healthy time for heavy metal. And the cool thing about it was that there was great music out there that, to some degree, was being bypassed by other genres and subgenres in heavy metal. But this thrash metal was pure [and] straight ahead. It's what we're all about. And we made it sound better with the box set. So you can get, let's say, a whole slice of a decade, or history, and understand what we were doing if you weren't there to experience it the first time."

OVERKILL and SYMPHONY X will join forces for a North American tour in September/October. The 24-date co-headlining trek launches at The Palladium in Worcester, Massachusetts on September 18, hits four Canadian cities, then wraps up with a very special night at Terminal 5 in New York City on October 17 — the first time in the bands’ combined histories that they'll play a show together in their own backyard.

OVERKILL's latest album, "White Devil Armory", sold around 8,400 copies in the United States in its first week of release to debut at position No. 31 on The Billboard 200 chart. The CD was released on July 22, 2014 in North America via eOne Music and on July 18, 2014 in Europe through Nuclear Blast Records. The effort was tracked at Gear Recording and was mixed by Greg Reely, who also worked on 2012's "The Electric Age". 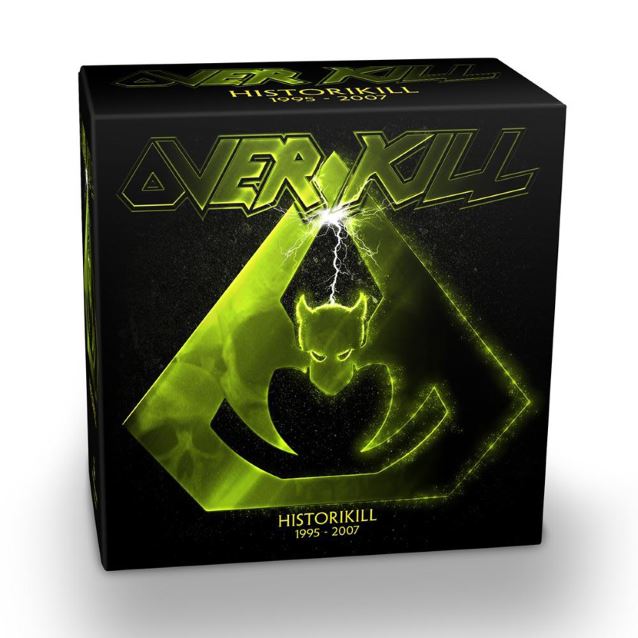