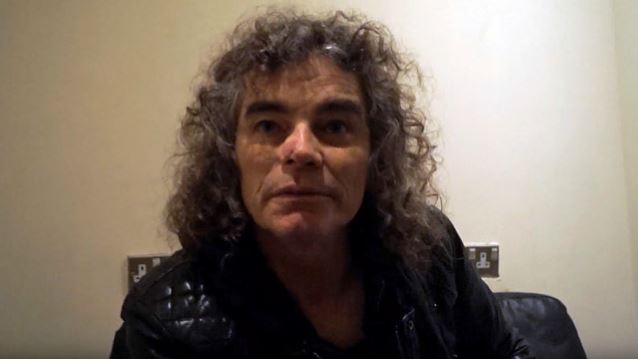 OVERKILL's BOBBY 'BLITZ' ELLSWORTH: 'I Don't Think Of Us As Artists'

Neuweltmusic conducted an interview with vocalist Bobby "Blitz" Ellsworth of New Jersey thrash metal veterans OVERKILL on April 10 at The Academy in Dublin, Ireland. You can now watch the chat below. A couple of excerpts follow (transcribed by BLABBERMOUTH.NET).

On the progress of the songwriting sessions for OVERKILL's next album:

Blitz: "The music is done. It's been demoed. I'm working [on the vocals and lyrics]. I'm about five [songs] deep at this point. So I kind of finish them; I'm the one who puts the roof on the house. My process always tkes about three months and I'm about halfway done with it. We'll be recording drum tracks by the second week of May. So it's just moving along at our regular schedule of doing things, which is kind of good. I mean, it's not routine. It's still about opportunity, it's still about trying to do something with that opportunity. So I think that whether it's eighteen [albums later] or eight, for us, it's always been about seizing the opportunity."

On what fans can expect from OVERKILL's new album:

Blitz: "I think it would be wrong for me to say. [Laughs] When you do seventeen [albums] before that… You know, people will always say, 'An OVERKILL record is an OVERKILL record.' From the inside, it always looks different to me. I think that we have a different arsenal of tools; we don't just thrash, we don't just use double bass. We use different kinds of grooves; we use some rock and roll, we use some punk, we use things that are just common to OVERKILL. We use some doom, to some degree. So I think that we have different tools that we use when putting these records together. But at the end of the day, the idea is to put the stamp of the OVERKILL record on it. So as it's still developing with regard to music versus melodies for the vocals, it still doesn't have a specific direction. But I do know, at the end of the day, it's going to be an OVERKILL record."

On where OVERKILL gets its inspiration for making new music:

Blitz: "Well, first and foremost, I don't think of us as artists, and when you don't think of yourself as an artist but more someone who's, let's say, a craftsman, it's a different mentality that you can always work — that's not the point — you can always have an idea. But if you're an artist, I think sometimes you dry up the ideas, or if you think of yourself as one. So we take on a very blue-collar work ethic and try to get into doing what we do best. I don't think there's ever a lack for ideas; it just will depend on what ideas are better than other ideas. So I think that we're never in a position where we've lacked for something to do musically."

Garcia previously played with OVERKILL for their appearance on the 2012 edition of the 70000 Tons Of Metal cruise. 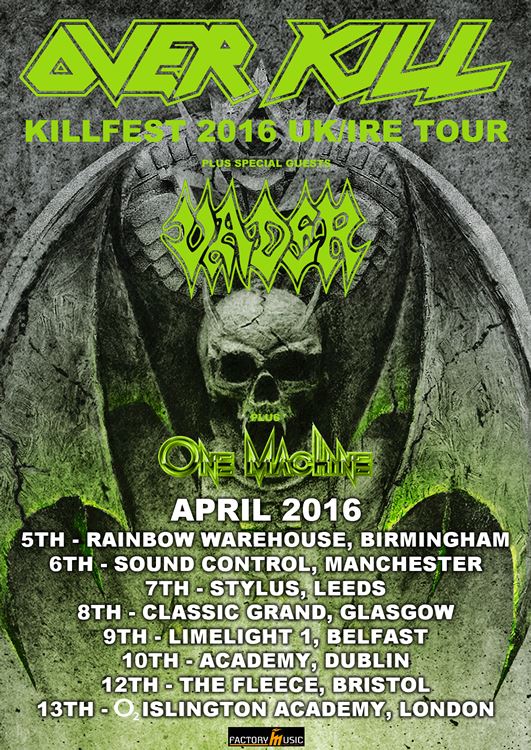