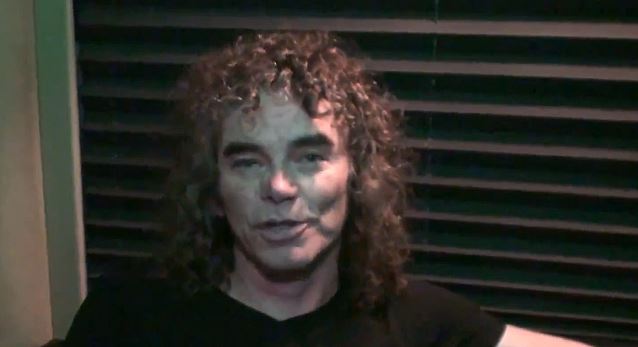 Each episode of "Tour Tips" features a touring act sharing five pieces of advice for artists who want to hit the road. In this episode, which was filmed n September 21, 2014 in Joliet, Illinois, vocalist Bobby "Blitz" Ellsworth of New Jersey thrash metal veterans OVERKILL shares his tips for surviving on the road during his band's recent North American tour.

OVERKILL's new album, "White Devil Armory", sold around 8,400 copies in the United States in its first week of release to debut at position No. 31 on The Billboard 200 chart. The CD was released on July 22, 2014 in North America via eOne Music and on July 18, 2014 in Europe through Nuclear Blast Records. The effort was tracked at Gear Recording and was mixed by Greg Reely, who also worked on 2012's "The Electric Age".

The limited-edition box-set version of "White Devil Armory" included a digipack CD, a leather belt and buckle plus a certificate of authenticity.

Speaking about what OVERKILL was trying to accomplish with "White Devil Armory", Ellsworth told Artisan News: "My personal motivation, and I can probably speak for my partner D.D. [Verni, bass], is that you don't want repetition. Obviously, we are what we are — a thrash metal band — [and] we fall into, let's say, a subgenre of this metal community, but the idea is that you wanna stay interested with it, you want to try, to some degree, to reinvent yourself. And I think the thing I'm most proud of when it comes to a record like Number 17, being 'White Devil Armory', is that that's the push for it. No repetition. Let's get in there and let's define that line between repetition and what style is. I write all these notes in my office where I have my little studio — 'Don't repeat yourself,' 'Don't use this,' 'Don't use that' — and that becomes kind of the flavor of the writing: Stay relevant, great