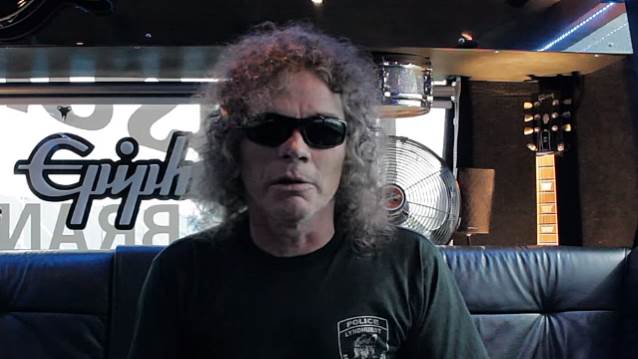 In the three-minute clip below, vocalist Bobby "Blitz" Ellsworth of New Jersey thrash metal veterans OVERKILL talks about the differences between the San Francisco Bay Area thrash scene and the East Coast thrash scene of the 1980s.

Said Blitz: "I'll start with what's different from us, and that would be the Bay Area sound. And I think that they got a stamp. And I think that to be a Bay Area band and be a successful Bay Area band, you needed to have similarities to each other and a lot of the same qualities and same approach to things. And that was kind of a local thinking, because, I mean, this wasn't something that was worldwide yet. And that local thinking from the Bay Area became worldwide, and probably the quintessential metal band, METALLICA, coming out of there, taking that Bay Area sound, I think a lot of other people wanted… not wanted, but showed, because of their locale, that they were from that same area. Most metalheads say, 'Oh, that's a Bay Area sound.' You already know what it is. I think on the other side of the country, where we were from, we didn't have that. We didn't have a local thinking. Our local thinking was day-to-day battles. It was about getting that show, knocking them down, hopefully getting another one after that. If you succeed on Saturday, probably you'll succeed on Sunday, if you use the same formula, and we were growing through that, but, I think, in my opinion, developing different musical personalities. We came from the New Wave Of British Heavy Metal, much like the Bay Area did, but we..."

He continued: "I remember going to college in Manhattan, and the coolest thing about it was that the punk scene had exploded. You could be walking down the street and see Dee Dee Ramone, or you could see Debbie Harry, or you could see the NEW YORK DOLLS, but then at night you could see them play. And I think that we came from that kind of the 'DEAD BOYS meets the New Wave Of British Heavy Metal,' but also 'THE HEARTBREAKERS meet the New Wave Of British Heavy Metal.' I think that that's really the difference between the two coasts, or the two larger areas of population in the States — they had their thing, and it was theirs, and we had a whole bunch of different shit that we kind of puzzled together to give ANTHRAX or CARNIVORE or TYPE O NEGATIVE or BIOHAZARD or OVERKILL a different configuration of how we put ourselves together."