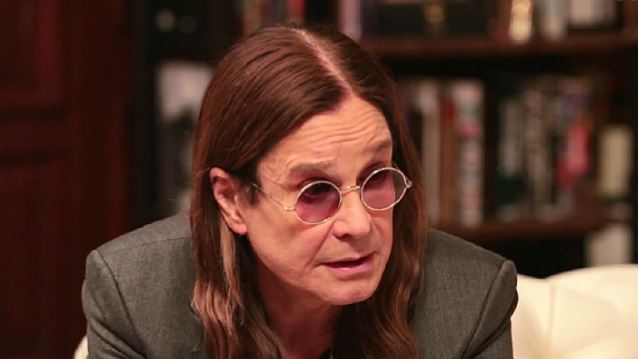 OZZY OSBOURNE Claims His Marriage To SHARON Is 'Back On Track'

Ozzy Osbourne says that his marriage to wife Sharon is "back on track again", less than three months after she allegedly discovered his affair with a celebrity hairstylist.

Sharon reportedly kicked Ozzy out of their home after discovering evidence of the affair — and possibly others — back in May. Earlier in the month, she she was quoted as saying that she was "seeing what it's like living on my own," but was then spotted taking a walk in Los Angeles with Ozzy.

In a brand new interview that aired on ABC's "Good Morning America", Ozzy stated about his marriage: "Oh, it's back on track again. You just, you make mistakes, and you learn by your mistakes, I think."

He added: "It's just a bump in the road. Some days it's good, some days it's terrible, some days you just drift apart for a while. But you get back on the horse, you know."

Osbourne's son, Jack, who is married with two children of his own, defended his father, with whom he stars in a new, offbeat travelogue reality series, "Ozzy And Jack's World Detour".

"As a married person myself, you know, marriage is not, like, 'Hey, we're married. All is good.' I mean, it's just life," Jack told "Good Morning America".

A source recently told TMZ that Sharon was "angry and hurt," but that Ozzy was "begging her not to leave him. The family is falling apart. They are talking daily and she still thinks there may be a chance they can save the marriage, but she's told friends it's a constant battle."

Sharon told The Sun that she didn't know if she could ever trust her husband again after she allegedly discovered his affair. Sharon told the British tabloid: "Can I ever trust him again? I don't know. I'm now questioning every statement — every move. The lies and intrigue still hurt." She added, "I don't want to hurt him. I admire and respect him. And that's what I expect back: respect. I didn't get that. It's very hurtful when you don't get that respect and consideration from your partner."

Sharon revealed that she is seeing a therapist regularly, and that she and Ozzy see a couple's therapist together. Ozzy is doing therapy alone. But Sharon added: "I'm seeing what it's like living on my own."

Sharon said: "Ideally I would love for my husband to deal with his issues and work at the problems that he has now. And be honest and open, to be able to come back to us with honesty and respect for the family. That's what I really wish."

Ozzy resumed a year-long farewell tour with BLACK SABBATH last month, which will include SABBATH and SLIPKNOT headlining a combined festival, Ozzfest Meets Knotfest, this September in San Bernardino, California. He has also reportedly been working on a new solo effort.