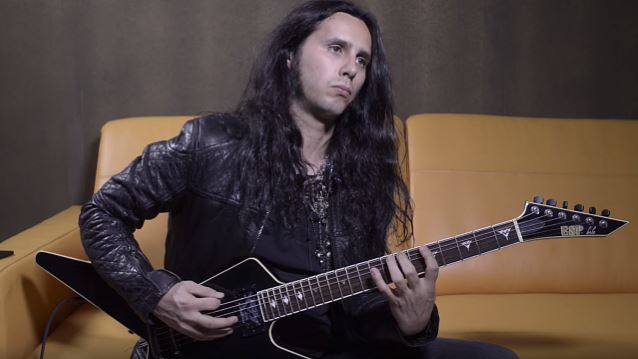 Greek guitar virtuoso Gus G., well known in rock and metal circles for his work as Ozzy Osbourne's guitarist and as leader of his own band FIREWIND, has uploaded video footage of his solo, filmed during Ozzy's October 31, 2015 performance at the Voodoo Music + Arts Experience at New Orleans City Park's permanent Festival Grounds. Check it out below.

Epic Records president Sylvia Rhone recently told Billboard.com that Osbourne is working on a "really special album." She added, "It's going to be amazing. It's something Ozzy has never done before that he's always wanted to do."

Ozzy will rejoin SABBATH later this month for what is being dubbed as that band's farewell tour, which kicks off on on January 20 in Omaha, Nebraska. A second leg of North American dates commencing on August 17 in Wantagh, New York was unveiled last October.

Gus G.'s second solo album, "Brand New Revolution", was released in Europe on July 24, 2015 via Century Media. The CD was made available through Century Media in Australia and South America, Dismanic/eOne in North America and King Records in Japan. The cover artwork was once again created by Gustavo Sazes, who previously worked with Gus on the guitarist's debut album, "I Am The Fire", and also took care of artwork duties by such bands as ARCH ENEMY, KAMELOT and FIREWIND.