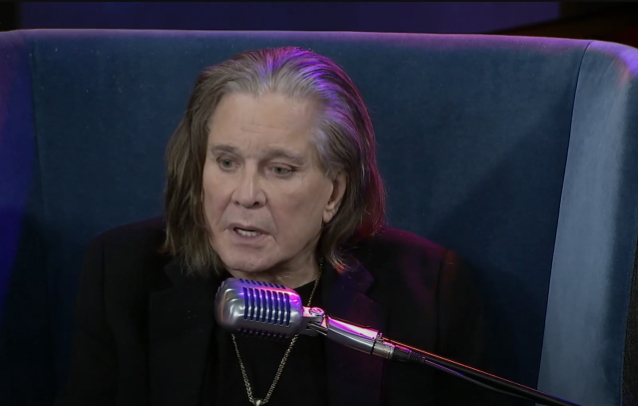 OZZY OSBOURNE Is Open To Making More Music With TONY IOMMI, But Not As BLACK SABBATH

On this week's edition of "Ozzy Speaks" on SiriusXM, Ozzy Osbourne was asked by co-host Billy Morrison if the singer's recent collaboration with Tony Iommi might lead to new music from BLACK SABBATH. He responded: "No, not more BLACK SABBATH. But I wouldn't say no to do some more with Tony. BLACK SABBATH is a completely different music to what I'm into now."

Ozzy went on to say that working with Tony on "Degradation Rules", one of their collaborative tracks from Osbourne's latest album, "Patient Number 9", "was great. I mean, now you don't have to sit in a room; you can do it over the phone," he said. "That track would have been a great BLACK SABBATH track on the '13' album. I wasn't really in love with that '13' album."

Asked by Morrison if that means that SABBATH is over and done with, Ozzy said: "Well, it's kind of, like, how many times do you wanna do the same… it's the same format, you know? It was very successful for a lot of years, and people wanted to see us. I did that farewell tour. And the only thing about that which was sad [was that original SABBATH] Bill Ward wasn't there. But I've spoken to Bill since. He's all right. I would work with any of them individually. But as BLACK SABBATH, I think it's [over]. We couldn't really beat what we've already done."

In an episode of the documentary series about the making of "Patient Number 9", Iommi was asked about the possibility of making more music with his SABBATH bandmate.

"I think we've got a different way now — we've got more relationship going over the last couple of years than we've had for a long time… because we've become freer now," Iommi said. "There's not the SABBATH thing there that we've got to do. We're in contact virtually every week. … It's just different now to how it was, and it's been good. It's been really good."

Asked about the "SABBATH nods" in the music he tracked for the album, Tony said: "Yeah, definitely. Well, I don't think I could ever get away from that."

Two months ago, Ozzy told Kerrang! magazine that he would be open to making new music with Tony but not under the SABBATH banner.

"If Ozzy Osbourne and Tony Iommi do an album together, it's going to sound like a SABBATH album," he said. "Tony was the sound of SABBATH. There's no getting away from the fact that, when he plays with me, it'll be some kind of a reflection of that. Maybe the tracks he did on my album was like what SABBATH should have been had we stayed together."

But, he added, "I want to take it away from SABBATH. We put that band to bed. And if he wants to [turn it into another] SABBATH album, I'm not doing it."

He also revealed why Iommi never previously guested on one of his records. "It was just that I never asked him," he said. "I sang on one of his albums [in 2002], but I'd never given it a thought [that he could] play on one of mine, to be honest. It was actually [producer] Andrew [Watt] who said, 'Why don't you ask Tony Iommi if he wants to do something?' I was, like, 'I know he’s going to tell me to go fuck myself.' But you don't know until you ask. When he sent [his tracks] over, I heard them and was just, like, 'Fuck me.'"

The original lineup of SABBATH came together in 1969 with Iommi, Osbourne, Ward and Geezer Butler on bass. That lineup recorded and toured through 1978, and periodically reformed through the '90s and 2000s for live work.

They regrouped again in late 2011 for a new album and tour, although Ward dropped out after a few months over financial issues. SABBATH used Ozzy's regular touring drummer Tommy Clufetos since then for live work. RAGE AGAINST THE MACHINE's Brad Wilk laid down the drum tracks on "13", which came out in June 2013.