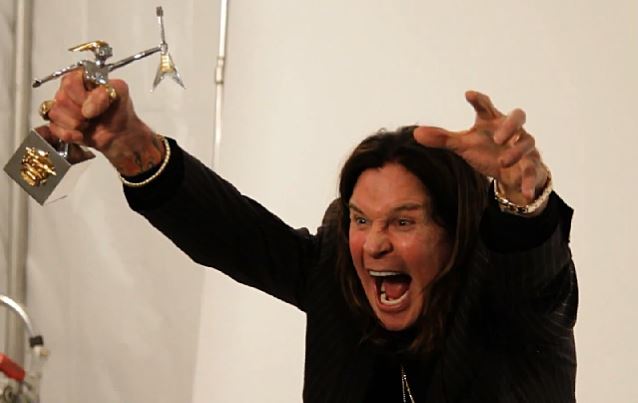 The milestone event marked the 10th anniversary of the awards and the first time they've been hosted outside of London. As part of their ongoing international expansion, Classic Rock's parent company, TeamRock, launched their exclusive TeamRock+ subscription service, the night of the show. TeamRock+ will give their ever-expanding international audience, which has seen growth both digitally and in print throughout the world, instant access to the rich editorial content of Classic Rock as well as its sister publications, Metal Hammer and Prog. Available via TeamRock.com, it will cost from $6.38 a month and and will be launched with a 30-day free trial.

The Classic Rock Roll Of Honour once again exceeded all expectations. The ceremony was hosted by multi-platinum Rock And Roll Hall Of Fame inductee Sammy Hagar. He was joined by a multitude of illustrious guest presenters, including Billy Gibbons (ZZ TOP),Joe Elliott (DEF LEPPARD),musician, writer and actor Henry Rollins, Eric Idle ("Monty Python") and Scott Ian (ANTHRAX) who presented awards to some of rock's biggest stars, including THE DOORS, QUEEN + Adam Lambert, Ozzy Osbourne, METALLICA, Wilco & Roger Daltrey, Joe Perry and Jeff Lynne. The night was capped off by Gregg Allman, one of rock's most acclaimed and beloved icons, receiving this year's Living Legend Award. The night was also highlighted by a stellar lineup of live performances from some of the most exciting and respected artists in rock: KINGS OF CHAOS, CALIFORNIA BREED, RIVAL SONS and Scott Weiland & THE WILDABOUTS.

Classic Rock editor Siân Llewellyn says: "What a night! I'd heard rumours that Hollywood was one of the best places for a party, and this evening proved those rumors true. The past, present and future of high-voltage rock 'n' roll came out to celebrate the music that has soundtracked all of our lives. Only at the Classic Rock Roll Of Honour could you glance around and see the likes of Gregg Allman, Ozzy Osbourne, Jeff Lynne, QUEEN and THE DOORS, to name but a handful. Roll on next year…"