Check out the official Chicago Open Air video announcement below.

In addition to three days of nonstop rock, Chicago Open Air's celebration of everything loud will also include Gourmet Man Food featuring local and regional cuisine, the Headbangers Bier Hall highlighting top brews from the region, other entertainment and fan experiences, and will be hosted by SiriusXM's Jose Mangin. The weekend gets started with The Chicago Open Air Kick Off Fiesta (details to be announced in February) and the official Chicago Open Air Pre-Party at Concord Music Hall on Thursday, July 13.

Here's what some of Chicago Open Air's top artists have to say about playing the festival:

Dave Mustaine (MEGADETH): "This year's Chicago Open Air festival is going to kick so much ass! I mean, KISS, MEGADETH, ANTHRAX and ROB ZOMBIE?! If I wasn't playing, I would want to go just to be part of the party!!"

Randy Blythe (LAMB OF GOD): "Wassup Chicago! We're stoked to be playing the Chicago Open Air this year. It'll be nice to be outside in Illinois for a change, especially since it won't be 10 below, haha. So come on out and bring your baggies, bikinis and suntan lotion, and surfboards (okay, so you can leave the surfboards at home). See ya there!"

"When curating the 2017 version of Chicago Open Air, we wanted to find that balance for everyone who attends the festival. From iconic artists like OZZY, KISS, KORN and SLAYER to ROB ZOMBIE, GODSMACK and STONE SOUR to AMON AMARTH, MESHUGGAH and BEHEMOTH. If you are a rock fan, this is a must-see experience."

"Rock is clearly alive and well in Chicagoland, and year two of Chicago Open Air promises to build on where we left off in creating one of America's best destination hard rock festivals," said Jason Wright, Live Nation's midwest president.

Tickets are priced as follows: 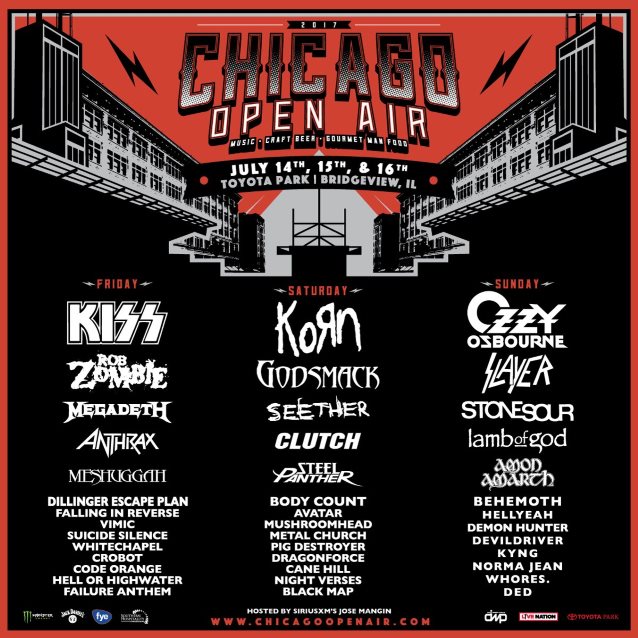