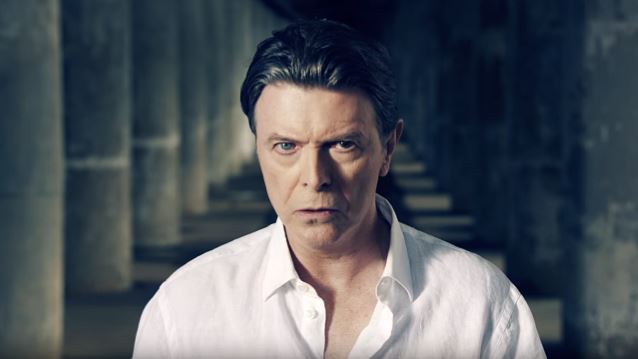 Ozzy Osbourne (BLACK SABBATH),Nikki Sixx (MÖTLEY CRÜE),Corey Taylor (SLIPKNOT),Krist Novoselic (NIRVANA),Slash (GUNS N' ROSES),Gene Simmons (KISS) and Brian May (QUEEN) are among the rock musicians and scores of other artists who reacted on social media to the passing of David Bowie, who died on Sunday, two days after his 69th birthday.

There aren't words enough to express the feeling of loss in this moment. RIP David. You will be… https://t.co/9N2DkKLzJt

David Bowie, you will be sorely missed. Bowie's “Changes” and the Ziggy story songs were a major influence for me. pic.twitter.com/N1nkD9h82W

In shock about @DavidBowieReal Never in a million years did I think that we'd lose such an amazing guy so young Full https://t.co/FrvXhkxbRg

Just came off stage to the news... Ziggy is my #5 album of ALL TIME and Life On Mars & Space Oddity two of my fav songs EVER #RIPDavidBowie

Truly sorry about David Bowie's passing. Another one of the Greatest Ones. *Michael*

I am grateful to David Bowie for everything he has done for me and millions of others. His art profoundly changed my life! #RIPDavidBowie

RIP David Bowie. Thanks for defining what it means to be a true artist and visionary.

David Bowie: The cleverest and most interestingly brilliant man of our time. What a vacuum he leaves, and how he will be missed. Roger

Thank you for the music David Bowie.

MESSAGE FROM IGGY: "David’s friendship was the light of my life. I never met such a brilliant person. He was the best there is. - Iggy Pop"

I simply cannot believe we now live in a world without Bowie. pic.twitter.com/qvMADZ1ryT

Sleep well dear?thanks for helping me to continually change?my house guest while you were Making Station to Station pic.twitter.com/njVj5iXPfn

RIP ZIGGY... Bowie... LEGEND. ThankU for leaving a legacy. You and Lemmy this year. We know U are sitting in a tin can far above the world!

David Bowie R.I.P. Few artists can only dream to reach his level. Always ahead of his time. pic.twitter.com/1Z7nvNUI8k

Goodbye to the man of many faces. Your art will always be beautiful and inspiring. Thank you. pic.twitter.com/qxcMKcW648

Well, that settles it. If David Bowie can die, then the rest of us mere mortals most certainly are going to #Bowie

... @thebrentsmith "Your face, to face, with the man who sold the world". David Bowie... https://t.co/Geiww8sKUU

Man I am just gutted to find this out!!! RIP David Bowie at 69. Had no idea he was battling cancer. Just gutted.... https://t.co/9fxHKWfaQ7

@TheFrankBello Frank The #NewAnthraxMusic is sounding Amazing Cannot wait for the .#NewAlbum

From Suffragette City to Let's Dance to Blackstar, #DavidBowie was a genius through and… https://t.co/EXiOwRUmsr

David Bowie made his last record knowing he was dying. What a Legend and a true artist @DavidBowieRealhttps://t.co/NIFnv1omBr

Another legend laid to rest..... much respect #RIPBowiehttps://t.co/wmszqdnjSy

The world loses another rockstar! FUCK! Goodbye Mr.Bowie it was a pleasure to meet you! https://t.co/glVZNex3ca

BRIAN'S SOAPBOX: RIP DAVID BOWIE"I woke up late, after a long night, to shocking news. David Bowie gone. He was a...