For the first time since its 1996 debut, Ozzfest — the annual musical event that celebrates hard rock and heavy metal — has created a special one-night-only New Year's Eve celebration to ring in 2019. Set for Monday, December 31 at The Forum in Los Angeles, the event features headliner OZZY OSBOURNE and a lineup of some of the greatest names in rock (and Ozzfest alumni): ROB ZOMBIE, MARILYN MANSON, and Jonathan Davis (of KORN),along with the Ozzfest debut of BODY COUNT featuring Ice-T. ZAKK SABBATH, fronted by Osbourne's guitarist Zakk Wylde, will headline a second stage outside. Four other yet-to-be-announced bands will also play that stage. The New Year's Eve party will include an outdoor stage, along with other holiday festivities, details of which will be announced in the coming weeks. The evening will conclude with Osbourne onstage counting down to the new year!

"Ozzy hates the holidays," Sharon Osbourne, Ozzy's wife and manager, tells Rolling Stone with a laugh. "He hates Christmas and he hates New Year's Eve. He always saying, 'Let's do a gig.' And I'm always like, 'There never is one.' So this year, we said, 'All right, let's do an Ozzfest, because we never did it this year.' Everybody used to play on New Year's and Christmas in the seventies and Eighties, but not anymore. So it's the perfect time."

Tickets for the Live Nation-produced Ozzfest 2018 go on sale Friday, October 26 at 10:00 A.M. PT. Ticket prices range from $49.50 for general admission to $179.50 for a reserved seat. VIP packages are also available, details of which can be found at Ozzfest.com.

Ozzfest started more than 20 years ago and was the first national music festival of its kind dedicated to hard rock music.

Over 17,000 concert-goers were in attendance for last year's all-day Ozzfest, which was headlined by OZZY OSBOURNE, while ROB ZOMBIE closed out the next day's Knotfest bill.

2017 was the second year Ozzy's Ozzfest had merged with SLIPKNOT's Knotfest for a two-day heavy metal juggernaut. 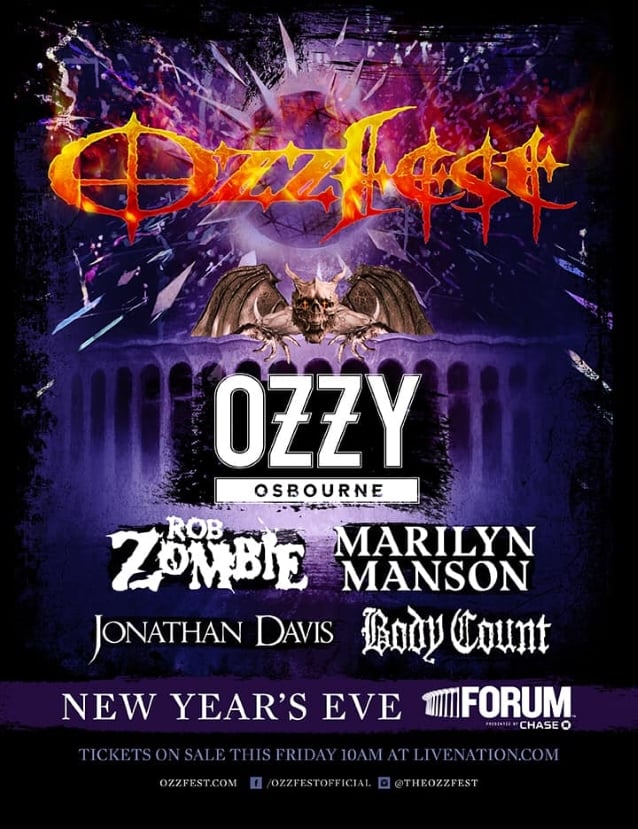