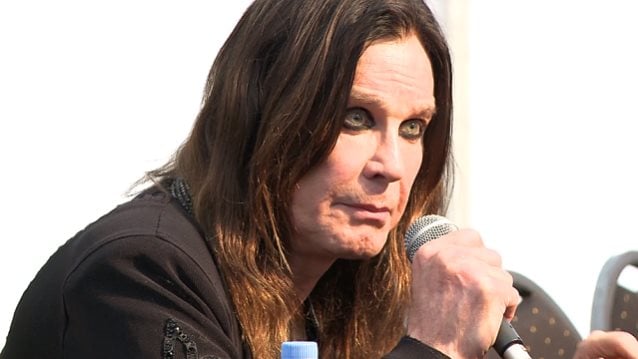 BLACK SABBATH singer Ozzy Osbourne has shot down as untrue reports that his 2012 relapse was caused by news that SABBATH guitarist Tony Iommi had cancer. "There was no reason except that I'm an alcoholic and one day you just look outside, it's a sunny day and you know nothing is going to come between you and a beer, and then you go right down the mad slide and you're crawling around on the floor wishing you didn't have to watch another sunrise," Ozzy told DailyMail.co.uk. "But if you take cocaine, you can drink forever. Cocaine and booze are the eggs and bacon of the addict's world, the perfect combination. And you just can't stop." Ozzy added about his he "looked in the mirror one day and thought: 'No more.' And now I'm trying. Every day."

Ozzy also spoke about his own children's well-documented battles with drug addiction. "At the time I didn't think anything, because I was off my head as well. During the MTV filming [of 'The Osbournes' show], I was drinking non-stop. I was in my mad world and Sharon [Ozzy's wife and manager] had to be the mum and the dad and deal with all of that.

As part of his recovery, Ozzy goes to daily AA meetings which he says is the only way he can stay sober. "Sharon tells me I'm a bloody fool and screams at me when I'm drinking, but that doesn't stop me," he tells DailyMail.co.uk. "But she supports me, she knows it's an illness, she knows it's part of who I am and it's only me who can deal with it and it's because I don't want to lose what I have with Sharon and the kids that I do it. No one else can cure an addict but the addict."

Osbourne, who once claimed he bit the head off a live bat, also discussed the irony in the fact that his planning permission to convert a barn on his British family home in Buckinghamshire into housing was recently turned down because of the impact it could have on the bats which live there. "I laughed my head off when Sharon read out the letter," he said. "Fucking bats. I said: 'They're vermin — I'm going to shoot them.' But I know it's funny. It's actually really cool. Karma's going to bite you in the arse. The bats bloody won."