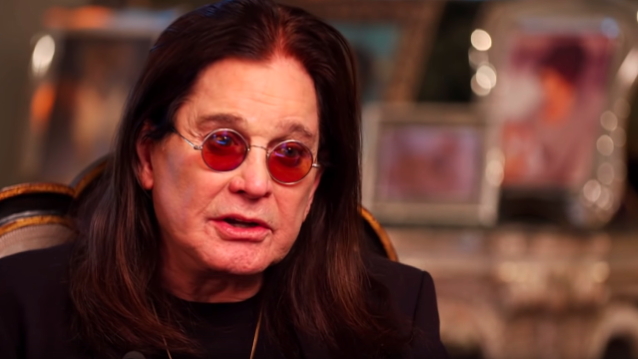 Ozzy Osbourne says that he was "terrified" his wife Sharon would leave him after she learned of his extramarital affairs four years ago.

After Ozzy's affair with celebrity hairstylist Michelle Pugh was made public in May 2016, he underwent therapy for sex addiction. Sharon and Ozzy later reconciled and they even renewed their vows.

Asked in a new interview with "Good Morning Britain" if he is amazed he and Sharon are still together, Ozzy replied (see video below): "I am. I've been a bad boy at times."

Sharon added: "It's like a Shakespearean play, our love story. Ozzy's has been a right old [expletive] with women."

Pressed about whether he feared Sharon would leave him the last time he was caught cheating, Ozzy said: "Oh, absolutely. I was terrified."

Asked if he is addicted to sex, Ozzy said: "I think it's another fix. If you're a junkie, like I was, anything that alters your mind, you've gotta find it. I didn't love any of these people. I've learned a lesson."

As for how close she came to kicking Ozzy out, Sharon said: "I was just really broken in every sense.

Ozzy chimed in: "I wish I hadn't done this stupid thing that I did, and that's the truth, because you never know what you had until you've lost it. And I thought I'd lost it, big time."

Back in 2017, Sharon told the British paper The Telegraph that Ozzy wasn't cheating with just one woman. "There were six of them," she said. "Some fucking Russian teenager... then a masseuse in England... our masseuse out here in Los Angeles... and then our cook. He had women in different countries. Basically, if you're a woman giving Ozzy either a back rub or a trolley of food, God help you."

Sharon talked about how she learned of his affairs. "We were sitting on the couch watching telly; Ozzy on one couch and me on the other," she said. "And suddenly, he sends me this e-mail. 'Why did you send me this stupid e-mail?' I asked, and when Ozzy told me that he hadn't sent me anything, I grabbed his phone and said, 'Look!' And, of course, it was a message meant for one of his bloody women."