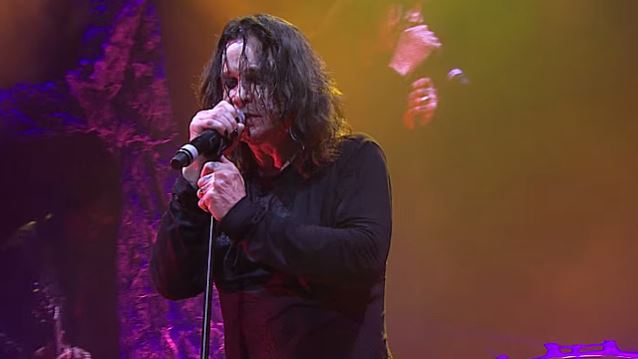 More details have been made available about Ozzy Osbourne's upcoming concert production in Las Vegas, "Hell Gate", set to take place this Halloween. Ozzy's wife and manager Sharon revealed on last night's (Monday, January 12) "after-dark edition" of "The Talk", her CBS talk show (see video below): "It's something that's gonna start Halloween. It was meant to start last year, but [we] couldn't get it together in time. And Ozzy's gonna be in Vegas for the whole month. And what it is is a Halloween experience. So it's a very state-of-the-art, interactive show that Ozzy will put on, with everything that goes with Halloween."

Ozzy told The Pulse Of Radio a while back what motivates him to keep performing live. "I was watching '60 Minutes' and there was a segment on Bruce Springsteen where they asked him the same question, and he said, 'You know what? It's fun. It's what I like doing. I like making them have fun and I like having fun for me by seeing them have fun.' And it's pretty true, you know. It's because I just love to see the kids. It's like a challenge for me."

He has spoken recently about recording a new solo album, but will also reconvene with BLACK SABBATH later this year to begin work on a follow-up to 2013's successful reunion set, "13".

Ozzy will also headline an event called Ozzfiesta at the Hard Rock Hotel in Riviera Maya, Mexico from May 27 to May 31. In addition to a headlining performance from Ozzy, the five-day festival will include a dinner party hosted by Sharon, performances by other artists, a question-and-answer session with Ozzy and his band, a Comedy Club Night, a charity golf tournament and more.