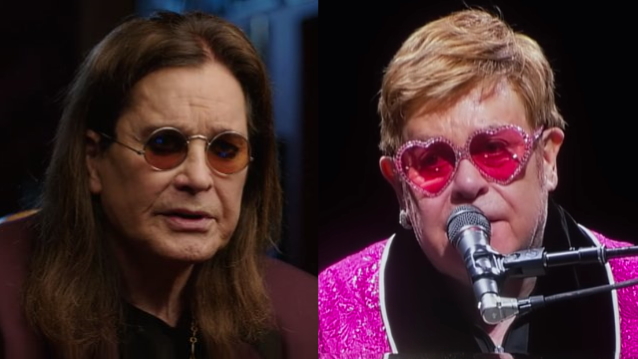 Ozzy Osbourne and Elton John have collaborated on the title song of the BLACK SABBATH singer's forthcoming solo album, "Ordinary Man". The disc will arrive on February 21 via Epic Records.

Three days after the news of the surprise collaboration was broken by Ozzy's wife and manager Sharon on her daytime TV talk show "The Talk", RED HOT CHILI PEPPERS drummer Chad Smith, who plays on the LP, spoke about the project during an appearance on "Volume West", which airs daily on SiriusXM Volume channel 106.

Asked by host Lyndsey Parker how Slash came to be involved with the album, Chad said: "Having Ozzy do new music, anyone that we mentioned to, 'We're making music for Ozzy,' everyone wants in. Anyone we spoke to. So we wanted it to be the right people. We didn't wanna just throw in names for names. [We wanted] people that love Ozzy, which is pretty much everybody anyway, but that made sense. The single that's out now called 'Straight To Hell', he soloed at the end of that — classic Slash wah-wah, bluesy; great. But, really, we wanted him to play on this song that is the title song, which is called 'Ordinary Man' — this more midtempoey, kind of BEATLES… Ozzy loves THE BEATLES — it's his favorite band. He's going on about THE BEATLES — THE BEATLES, BEATLES, BEATLES. And you would think, the Prince Of Darkness — THE BEATLES, really? So he's, like, 'We need something midtempo, not so heavy.' So Andrew [Watt, 'Ordinary Man' producer] had this little piano idea thing, and we made it into this song, and it's epic. And Slash plays the solo. It's so epic, there's two Slash solos. [Laughs] It's a really good song. And he plays beautifully on it, and we're so happy to have him on it.'

According to Chad, Elton ended up playing on the record as an afterthought. "We decided, 'Well, [the song] has a piano. Who is a really good piano player? I don't know…. Let's get the Rocket Man,'" Smith recalled. "And so Andrew and I went down to Atlanta, where Elton John lives when he's on the East Coast. I think he kind of lives all over the place. And we recorded him. And he played the piano on the song, and he plays it beautifully, of course. And then we're, like, 'Why don't we have him sing a verse?'"

Chad went on to say that Elton and Ozzy both sound "fucking awesome" on the song. "These two iconic legendary English fucking rockers that have been through it all are singing about the end of their lives. 'I don't wanna die an ordinary man.' And it's fucking great," he said. "Me and Andrew are pinching ourselves. And Elton was so great, so gracious. 'I'll do anything for Ozzy. I love Ozzy.''

"And so on this 'Ordinary Man' song, you've got Duff McKagan, Slash, Andrew Watt, wonderboy producer, writer, hot-shit guy of the moment, great musician," he continued. "You've got the Prince Of Darkness, Ozzy Osbourne. You've got Sir Elton John, and a drummer from some other band. You've got the fucking Avengers of rock and roll. It's so fucking good. And at the end of this song, every time I hear it, there's this string thing at the end. We went to Abbey Road [studios], and it's strings and a choir. It's fucking epic, and every time I hear it, I'm, like, 'And the Grammy goes to…'"

This past November, Ozzy released "Under The Graveyard", his first new solo music in almost 10 years, which garnered more than 2.8 million global streams in its first week.

Recorded in Los Angeles, the album features producer Watt on guitars, McKagan on bass and Smith on drums.

Back in October, Ozzy once again postponed his European tour, marking the second time the BLACK SABBATH singer has done so following a series of health issues.

Ozzy initially scrapped his entire 2019 schedule early last year, as he recovered from surgery to repair an injury sustained while dealing with his bout of pneumonia. The European leg of his "No More Tours 2" trek was then rescheduled for January through March 2020, with the North American dates set to follow in May 2020.