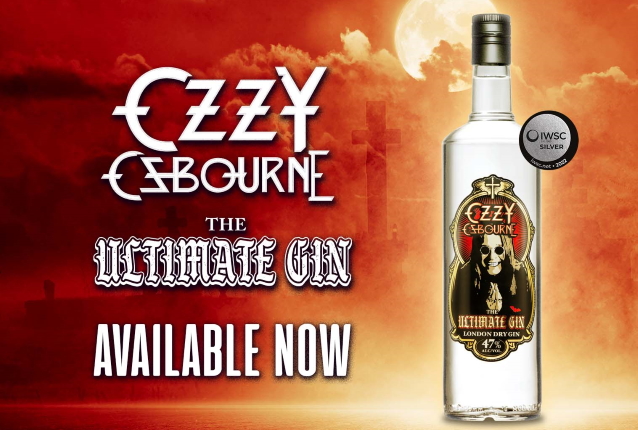 Ozzy Osbourne's The Ultimate Gin is now available in Europe through www.brandsforfans.com

Made in the classic London Dry Gin style and with a bold alcohol content of 47%, The Ultimate Gin's exceptional quality has been recognized in a recent Silver Medal from the IWSC, the beverage industry's globally recognized benchmark for spirits awards.

Available exclusively in the Brands For Fans webshop in a 700ml glass bottle, now you can have your fill of the long-awaited The Ultimate Gin.

Two years ago, Ozzy revealed that his latest solo album, "Ordinary Man", was the first LP he has made completely sober.

"I thought it was the drugs and the alcohol that made it all work," he told Apple Music's Zane Lowe in an interview. "But it's not true. All I was doing for years is self-medicating 'cause I didn't like the way I felt. But then this is the first album I've co-wrote and recorded fucking completely sober."

Prior to the arrival of "Ordinary Man", the last record that Ozzy worked on was BLACK SABBATH's 2013 reunion effort, "13".

"The last album, I wrote some of it stoned," the singer, who has been sober nine years, said. "I quite like being sober now. 'Cause at least I can remember the fucking thing I did yesterday."

Osbourne also expressed his bewilderment over the fact that he is still alive while other legendary musicians have passed, including SOUNDGARDEN's Chris Cornell, ALICE IN CHAINS' Layne Staley and LINKIN PARK's Chester Bennington.

"Why am I here?" Ozzy asked Lowe. "Chris Cornell was a great, great singer.

"People go, 'You must have the Midas touch' or whatever," he added. "I'm lucky. I wasn't any better than any of them. I even fucking would go so far as to say I was worse in some cases. But it's the luck of the draw. Seventy-one and I don't fucking understand how I got there."

Ozzy, who suffers from Parkinson's disease, publicly announced his diagnosis in January 2020, but was actually diagnosed back in 2003.