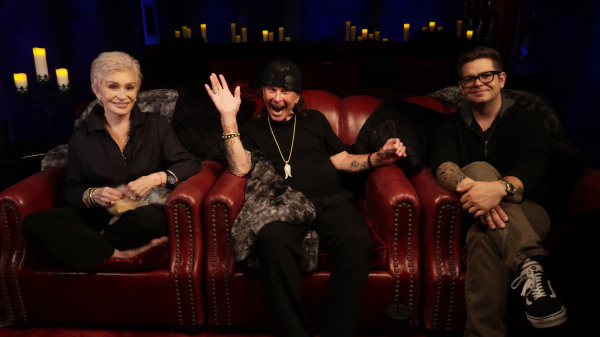 According to Variety, Ozzy Osbourne and Sharon Osbourne will join their son, Jack, for a new Travel Channel series called "The Osbournes Want To Believe". Consisting of eight hour-long episodes, the program focuses on Jack's efforts to convince his parents of the veracity of clips of purported paranormal activity.

"The Osbournes Want To Believe" will premiere on Sunday, August 2 at 10 p.m. eastern. In the first episode, Jack shares video footage of poltergeists, haunted dolls, UFOs and unidentifiable beasts.

"We see if I can poke at my parents" over such things as ghosts and UFOs, says Jack. "It's actually going to be a lot of fun."

Jack and Ozzy were previously seen in their hit reality series "Ozzy & Jack's World Detour", which aired for three seasons on History and A&E. That show focused on father and son as they traveled the world together, exploring the history behind some of the planet's most storied sites, while checking out some lesser-known locations along the way.

"The Osbournes Want To Believe" is not the first Travel Channel paranormal series Jack is involved with. He and fellow paranormal investigator Katrina Weidman are the stars of "Portals To Hell", which chronicles their chilling journey to historically haunted locations in the United States, confronting sinister stories of the supernatural as they seek concrete evidence that a spirit world exists. In each episode, Osbourne and Weidman dive headfirst into a site, examining unusual incidents while utilizing specialized technology and a network of experts to help document and uncover the truth.