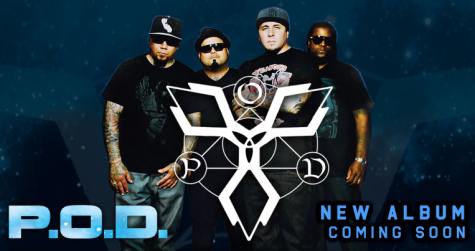 Christian hard rockers P.O.D. (PAYABLE ON DEATH) have completed work on "Murdered Love", their first new studio album in four years. Due out this summer, the CD is the band's long-awaited follow-up to "When Angels & Serpents Dance". "Murdered Love" sees the band reunited with longtime producer Howard Benson, who also produced the band's massive "Satellite" album alongside hit CDs for Kelly Clarkson, THEORY OF A DEADMAN, DAUGHTRY, THE ALL AMERICAN REJECTS and MY CHEMICAL ROMANCE.

Fans can now listen to "Eyez", the first preview track from "Murdered Love", at www.payableondeath.com. The song features special guest vocals from Jamey Jasta of HATEBREED.

"'Eyez' is the first 'look'from our new album coming out this summer. We wanted to come out hard for all our die-hard warriors," says P.O.D. lead vocalist Sonny Sandoval.

P.O.D. will kick off a series of tour dates and festival shows on April 28 and will stay on the road throughout 2012.

P.O.D. last year filed a lawsuit against the band's former record label, Tennessee-based INO Records, claiming that the company breached its contract by refusing to pay the group a $400,000 advance for its next album.

According to the lawsuit, which was filed in Nashville, the group informed the label in November 2010 that it was ready to start recording the follow-up to 2008's "When Angels & Serpents Dance". The band claims INO refused to pay the option, explaining that P.O.D. had " 'abandoned' its obligations (to INO) under the agreement."