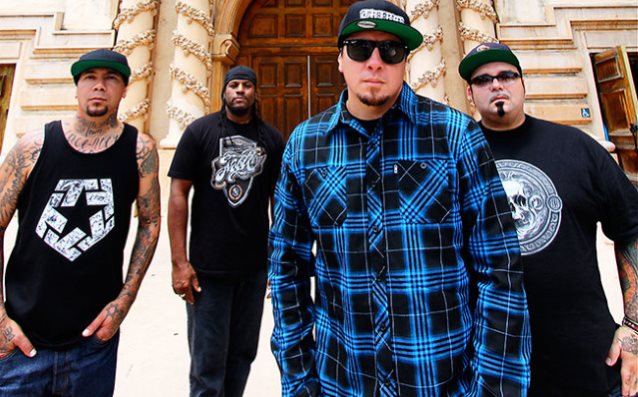 P.O.D.: New Song 'This Goes Out To You' Available For Streaming

"This Goes Out To You", the brand new single from P.O.D., can be streamed below (courtesy of Billboard.com). The song is taken from the band's ninth studio album, "The Awakening", which will be released on August 21 via T-Boy/Universal Music Enterprises (UMe). Album preorders will go live tomorrow (June 9) on iTunes and Amazon.

"The Awakening" was recorded at a Los Angeles-area studio with P.O.D.'s longtime producer Howard Benson.

"We're excited about the new record," P.O.D. singer Sonny Sandoval told MikeJamesRockShow.com. "It's a conceptual record, so it's something different for us. It has a storyline to it. I mean, the songs… we love 'em. We had a chance to play a few new ones live."

In a recent interview with Loudwire, Sandoval stated about the material for P.O.D.'s forthcoming album: "I'm digging it. We have a little something different. I can't really say now, but we're trying a different approach."

He continued: "I think what we've done, it's such a collection of songs that not everybody gets. Some bands sound like one song the whole album through. We've been all over the place, because we are punk, hardcore, rock 'n' roll, metal, reggae, and I think sometimes it might be too much diversity and kids are lost. It's too big of a buffet for them to go for and they want three chords sometimes. We're never going to do that."

Sandoval added: "We're putting something together that tells a story. Maybe it's just for us, maybe it's not for your average listener, but it's something we're having a lot of fun doing. We're excited."

With no plans to take a break this summer, P.O.D. will spend the dog-days on the road headlining sheds and festivals with more than 30 dates in North America. T