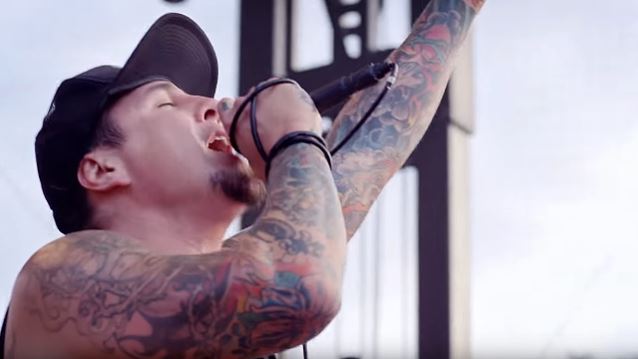 In a brand new interview with I'm Music Magazine, vocalist Sonny Sandoval of SoCal hard rockers P.O.D. spoke about the current state of the music industry. He said: "It's all corrupt either way you look at it, but it should be fair down the line. Whoever is in charge of the artist will always have the upper hand. They act like it's the artists' world, but it's the other way around, so they're going to do whatever they want to do."

He continued: "There are no A&Rs out there today looking for the next BLACK SABBATH or AC/DC or U2; they're not looking to make great art, they're looking to make money and that's what's made this industry gross."

Sonny went on to say: "If you look at these bands like THE BEATLES, they did something that was new for that time, whether it was shocking or just a new direction that they were going. Now, there's nothing shocking and everyone sounds the same and there's nobody being original anymore. They're just duplicating something that's already happened and that immature, silly little 14-year-old doesn't know that. With all the access they have to find out all the information that they could want to, they know nothing about music, but they think they do. They think someone is amazing and they're going to buy all of their releases, but this band is already the fifth copy of this band. You don't even have to play your own instrument these days; you just play the tracks."

He added: "I guess I just come from an old school where you had to prove yourself, and you don't have to in today's music."

P.O.D.'s ninth studio album, "The Awakening", which was released on August 21 via T-Boy/UMC. The evocative album, produced by the band's longtime collaborator and friend Howard Benson (MY CHEMICAL ROMANCE, KELLY CLARKSON), features 10 tracks and special guests Maria Brink from IN THIS MOMENT and Lou Koller from SICK OF IT ALL.