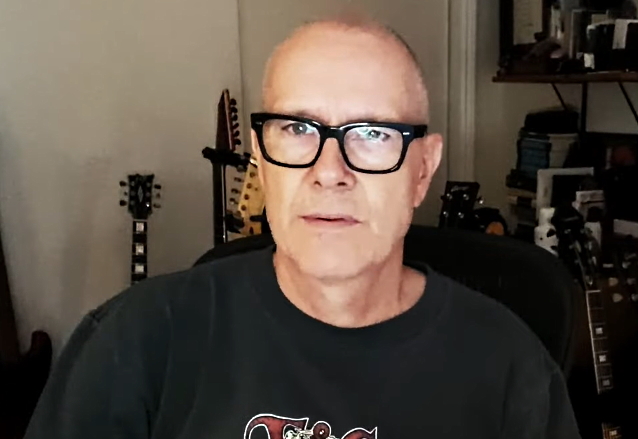 HELMET frontman Page Hamilton has confirmed to the "Thunder Underground" podcast that he is working on material for the band's first album in more than five years. "I have some scraps. That's about all," he said (as transcribed by BLABBERMOUTH.NET). "I'm writing a piece for this high school in Memphis called the Christian Brothers. It's their 150th anniversary. It's the oldest high school orchestra in the country. So I have to finish that. I have some time — [I have to complete it] by 2023; I have a year.

"I've kind of started to organize my shit," he continued. "I'm doing a session next week for an Austrian series, this TV series. It's like an HBO kind of thing — this six-part thing. And that's not writing — that's just [me being] a hired gun. But they're writing the music around my guitar. And none of it sounds like guitar. [Laughs] He texted me today. He's, like, 'This sounds like church bells. I never knew you were religious.'

"But, yeah, the HELMET stuff, I think realistically, once I get back from New Year's Eve, from [being] in New York, I'm gonna sit down and buckle down," Page added. "So I'll do my days where I try to divide it into the orchestral writing thing, this Christian Brothers piece, which is mostly brass and woodwinds and percussion, and then the HELMET stuff. 'Cause if you're just beating the pavement on one thing all day every day, I think it can get stale — for me anyway. First thing I do every day is play jazz guitar. So that keeps me excited and happy.

"When I produce bands, I have a whole routine. I have coffee in my hotel room and I play jazz for an hour, an hour and a half. Then I can go and listen to a rock band for 12 hours. If I didn't do that, I might hang myself."

HELMET's first official live album, "Live And Rare", was released on November 26 via earMUSIC. It was made available on heavyweight black vinyl as well as a CD digipak edition and digital.

Earlier this year, HELMET released a cover of GANG OF FOUR's 1981 song "Into The Ditch". The track was recorded for a tribute album to GANG OF FOUR's guitarist Andy Gill, "The Problem Of Leisure: A Celebration Of Andy Gill And Gang Of Four".