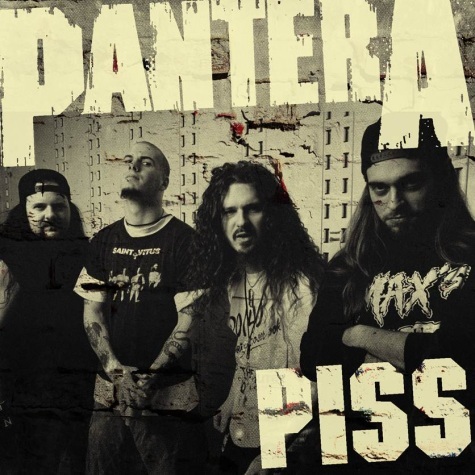 While combing the PANTERA vaults for the 20th anniversary reissue of "Vulgar Display Of Power", drummer Vinnie Paul Abbott made an astounding discovery: "Piss", an incendiary blast of vintage PANTERA from the original recording sessions that had long been forgotten. After 20 years, "Piss" will finally make its debut this Wednesday, April 11, when the newly created video for the song will premiere at the Revolver Golden Gods awards in Los Angeles, which will be broadcast live on Xbox Live, as well as on the Xbox and Revolver Facebook pages. The video will make its worldwide premiere right before the show starts at approximately 10:55 p.m. ET / 7:55 p.m. PT. The song will then be released to radio outlets and all digital music retailers the following day. PANTERA are also the subject of a Revolver special issue, which hits newsstands everywhere on April 15.

For the "Piss" video, PANTERA put out a call through their Facebook page for fans to submit home videos of them rocking out to the band or attend a video shoot in Los Angeles. The resulting video is an amazing collection of fans of all ages, from around the world, moshing, jumping, punching, kicking, and just plain rocking out to PANTERA. The video, directed by Zach Merck, also features some amazing slow-motion shots that recreate the face punch from the iconic cover of "Vulgar Display Of Power".

"'Piss' is the only unheard complete PANTERA track in existence, "said Vinnie. "It was recorded at the same time as 'Vulgar Display Of Power' and it's 100 percent PANTERA with attitude and our signature groove! After mixing it, I can't believe it didn't make the record! So it's 2012 and 20 years later and new PANTERA music has been delivered."

In anticipation of the reissue of one of the greatest metal albums of all time, PANTERA's 1992 masterpiece "Vulgar Display Of Power", Revolver magazine has created a PANTERA special issue, which includes the whole story of the band, an in-depth look at the making of "Vulgar", fallen guitarist "Dimebag" Darrell Abbott's final interview, and more.

Revolver will host a release party for the issue on April 12 at the Key Club in West Hollywood, California. Plus, cover illustrator Tim Bradstreet will be on hand to sign copies of the issue. Providing the soundtrack for the evening will be members of SLAYER, MEGADETH, ANTHRAX, ADRENALINE MOB, and some very special guests, who will all be putting on the "Metal Masters 3" clinic for musicians, presented by Samson, Zoom, and Hartke.

February 25 marked the 20-year anniversary for PANTERA's "Vulgar Display Of Power", a landmark album widely acknowledged as one of metal's most enduring and influential masterworks. Recorded by singer Philip Anselmo, guitarist "Dimebag" Darrell Abbott, bassist Rex Brown and drummer Vinnie Paul Abbott, the album has been certified double platinum by the RIAA and features several of the group's most iconic songs including "Walk", "Mouth For War", "This Love" and "Fucking Hostile".

To celebrate, Rhino channels the album's relentless blitzkrieg of musical aggression onto a two-disc Deluxe Edition. The CD includes the original album remastered and "Piss", a recently discovered unreleased track from the recording sessions. The DVD contains an unreleased live performance filmed in Italy in September of 1992 plus the three official music videos from the album.

Due out May 15, 2012 from Rhino, the CD/DVD set will be available at retail outlets, including Pantera.com and Rhino.com, for a suggested list price of $19.98. A version of the release will also be available digitally.

Along with the unreleased song, "Vulgar Display Of Power (Deluxe Edition)" also features unreleased video of the quartet performing six songs at the Monsters Of Rock show in Reggio Emilia, Italy on September 12, 1992. The set list draws almost exclusively from "Vulgar" ("This Love", "Rise", "Mouth For War"),but also includes the title track from their previous album, "Cowboys From Hell", and a melding of "Vulgar"'s "Hollow" and "Cowboys"' "Domination", which was a live staple of the band. Video of PANTERA performing live during this era is extremely rare, making the DVD one of the few ways to see them in their prime.

Dimebag Darrell was co-founder and lead guitarist for PANTERA. When PANTERA broke up in 2003, Dimebag and his brother Vinnie Paul formed DAMAGEPLAN. On Dec. 8, 2004, while performing with DAMAGEPLAN at the Alrosa Villa in Columbus, Ohio, Dimebag was shot and killed onstage by Nathan Gale. He was 38 years old.