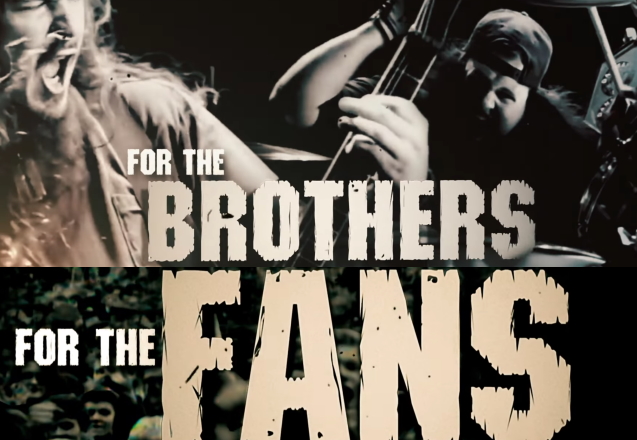 PANTERA Reunion: 'For The Brothers. For The Fans. For The Legacy.'

PANTERA has shared a new video teasing the band's upcoming return to the live stage. The clip was uploaded to PANTERA's social media just hours after it was announced that the influential heavy metal group will play its first shows in over 20 years in December 2022, starting with a co-headlining slot at Mexico's Hell & Heaven Metal Fest, followed by appearances at three Knotfest festivals in South America.

The new teaser video features pictures and footage of the classic PANTERA lineup along with of concert clips of PANTERA fans, along with the words "For the brothers. For the fans. For the legacy."

Vinnie was also asked about his relationship with Anselmo, with whom he had not spoken since PANTERA split in 2003. Pressed about whether it was true that he indirectly blamed Philip for the death of Dimebag, suggesting that some remarks the vocalist had made about the guitarist in print just weeks earlier might have incited the guitarist's killer, the drummer said: "I'm just gonna say I have no comment on any of that, man. I'm beyond PANTERA. I've done so many other things with my life since then. And I always believe if you live in the past, you have no future. So, man, I'm happy doing what I do with HELLYEAH, and I'm gonna leave it at that." French, at that point, asked Vinnie if we can safely assume that that there are no circumstances under which all the surviving members of PANTERA would ever get back together. Vinnie responded: "That's a pretty damn good assumption. Yeah, man. [Laughs]"