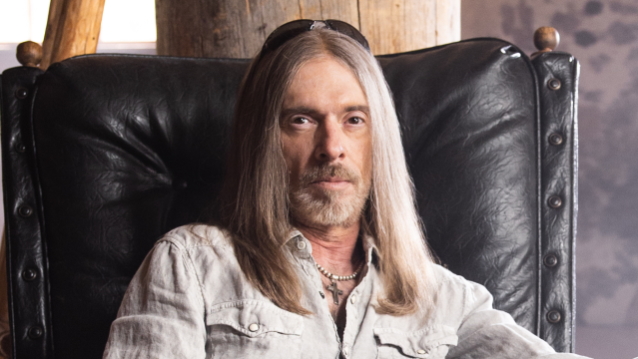 Gibson TV, the iconic, American guitar maker's award-winning, worldwide online network, has premiered the fifth episode of the show titled "Icons" — a longform interview series featuring some of the most iconic artists, producers, and music business pioneers in the world.

In the new episode of "Icons" out today, Gibson TV sits down with Rex Brown, the acclaimed multi-instrumentalist, solo-artist, and member of PANTERA. In this intimate look into his musical journey, which was filmed in December 2020, Rex dives deep into his music influences ranging from James Jamerson, John Entwistle, KISS and ZZ TOP, while sharing personal stories surrounding his childhood, the enduring legacy of PANTERA and more.

Touching upon the breakup of PANTERA and the rift between singer Philip Anselmo and the Abbott brothers — PANTERA guitarist "Dimebag" Darrell Abbott and drummer Vinnie Paul Abbott — including a 2004 Metal Hammer interview in which Anselmo said of Dimebag, "Physically, of course, he deserves to be beaten severely," Rex said: "The Phil thing… Yeah, it just got gnarly [between them]… We don't talk about that shit in the fucking press, fellows."

Dimebag was shot and killed in December 2004 onstage in Columbus, Ohio by a troubled schizophrenic who believed that the members of PANTERA were stealing his thoughts. At the time, Dimebag was performing with DAMAGEPLAN, the band he and Vinnie Paul formed after PANTERA broke up in 2003.

Brown told Gibson TV that Anselmo's comments were unfairly linked to some of the guitarist's shooter's motive.

"[Vinnie] would not have anything to do with Phil — period," Rex said. "He thought that that was the reason his brother was dead. I disagree with that. I think this was a nut that had already been out there planning and premeditating whatever move he was gonna make."

Rex also discussed his personal relationship with Vinnie Paul toward the end of the drummer's life.

"Vinnie and I, we would exchange pleasantries over… Let me just put it this way. I know he loved me, and I loved him," Brown said. "That's all I need to know."

Officers who searched Dimebag's murderer's apartment found no "computers or magazines or compact discs" related to DAMAGEPLAN or PANTERA. However, a compact-disc player found inside the Pontiac Grand Am that the murderer drove to the Columbus concert where Dimebag was killed contained a DAMAGEPLAN CD.

Several witnesses to Dimebag's murder, including band and crew members, suggested that the shootings might have been motivated by the breakup of PANTERA or a public dispute between Dimebag and Anselmo. But investigators quickly dismissed the theory, saying that there was "no evidence leading detectives to believe [the murderer] was communicating with Phil Anselmo or any other individual . . . in an effort to hurt Dimebag Darrell Abbott." Columbus police closed their investigation in October of 2005 without establishing a motive for the shootings.

Philip discussed his rift with Vinnie Paul in a 2011 interview with High Times. At the time, he said: "[Vinnie] has pinned the guilt [for Dimebag's murder] on the wrong guy. He has pinned the fucking guilt on the wrong guy. And I'll tell you what: I resent it. And I'll say this I spoke with the police officer [Columbus, Ohio cop James D. Niggemeyer] that blew this motherfucker who killed Dimebag — blew him away, the guy who killed him. And I asked him the hard question. I said, 'Tell me: Did he purposely shoot just Dimebag?' And he said 'Yes.' And I kind of choked up. And I thought for sure I knew what was gonna come out of his mouth when I said, 'Why? Why did he shoot Dimebag?' He said, they went back to his apartment, this murdering motherfucker, and he had notebook after notebook — stacked notebooks — with all about writing how he was gonna kill PANTERA for ripping off his songs. Kill PANTERA, PANTERA. Not once did any of [his writings] name any of us specifically, and if it did, it was all four of us, but it was rare. And so I said to this cop, I said, 'So, then, what you mean is had it been me playing with SUPERJOINT [RITUAL] or DOWN that night, this motherfucker would have come after me?' And he just said 'Absolutely.' As a matter of fact, he was crying and all he could do was nod his head 'yes.' Absolutely."

Vinnie was also asked about his relationship with Anselmo, with whom he had not spoken since PANTERA split in 2003. Pressed about whether it was true that he indirectly blamed Philip for the death of Dimebag, suggesting that some remarks the vocalist had made about the guitarist in print just weeks earlier might have incited the guitarist's killer, the drummer said: "I'm just gonna say I have no comment on any of that, man. I'm beyond PANTERA. I've done so many other things with my life since then. And I always believe if you live in the past, you have no future." The radio host, at that point, asked Vinnie if we could safely assume that that there were no circumstances under which all the surviving members of PANTERA would ever get back together. Vinnie responded: "That's a pretty damn good assumption. Yeah, man. [Laughs]"

Though it would be unfair to blame PANTERA's demise directly on Anselmo's side band DOWN, it's clear that the project — as well as Anselmo's many other projects, like SUPERJOINT RITUAL — became another snowball in the avalanche of bad feeling that eventually overwhelmed the band. Certainly, the lack of direct communication between Anselmo and the Abbott brothers also had something to do with it, as did the "he said/they said" salvos that were fired back and forth between the two camps — with Brown caught in the middle — via interviews in print magazines and online publications.

Earlier this year, it was announced that Brown and Anselmo would team up with guitarist Zakk Wylde (BLACK LABEL SOCIETY, OZZY OSBOURNE) and drummer Charlie Benante (ANTHRAX) for a world tour under the PANTERA banner.