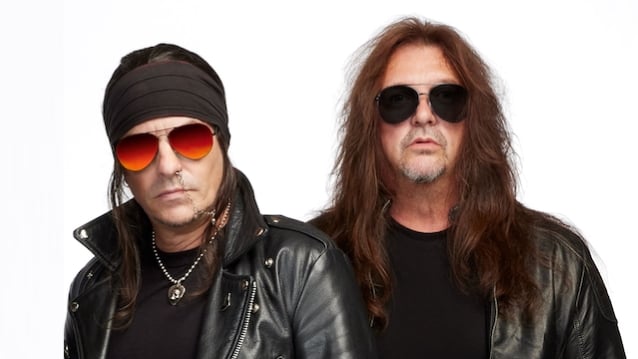 Last month, SKID ROW postponed its previously announced tour of Australia in order to allow guitarist Dave "Snake" Sabo "the proper time to heal" from his "rescheduled neck surgery." The dates, which were originally slated to happen in December, will now take place in May 2023.

Speaking to The Rock Experience With Mike Brunn, SKID ROW bassist Rachel Bolan stated about his bandmate (as transcribed by BLABBERMOUTH.NET): "He's doing okay. He's been in chronic pain for quite some time and just dealing with it — I would say at least 15 years. And being on planes, wearing 10 pounds of wood around your neck and jumping around with it every night, none of that helps. So he finally got to the point where it was starting to affect his arm — like numbness and pain and stuff like that. And it's a couple of discs. So they scheduled surgery for December, and that's where we're at now. And we're taking, obviously, December, January and February off for him to do PT [physical therapy] and all that stuff. And he'll be fine. He's psyched. He's, like, 'I just don't want to be in pain anymore.'

"Yeah, it's for the better. We're bummed we didn't get to go to Australia, but this is a legit reason why not," Bolan added. "So we rescheduled for May, and it'll work out. I think we may go to Japan after that and then possibly to Korea, since we'll be on that side of the planet. But the promoter, he understood, and all of our fans understand that it's just one of those things that you can't get around because it could do irreparable damage if you don't get it taken care of. He's put it off long enough. He probably should have had the surgery about 10 years ago, 12 years ago."

In October, SKID ROW played some of the shows on its U.K. tour without Sabo after he tested positive for COVID-19. Filling in for him was SKID ROW's guitar tech Casey Sproatt.

Sebastian Bach fronted SKID ROW until 1996, when he was fired. Instead of throwing in the towel, the remaining members took a hiatus and went on to play briefly in a band called OZONE MONDAY. In 1999, SKID ROW reformed and, after a bit of shuffling over the years, featured a lineup consisting of bassist Rachel Bolan and guitarists Dave "Snake" Sabo and Scotti Hill, alongside drummer Rob Hammersmith and singer Johnny Solinger. SKID ROW fired Solinger over the phone in April 2015, a few hours before announcing ex-TNT singer Tony Harnell as his replacement. Eight months later, Harnell exited the band and was replaced by Theart, the South African-born, British-based singer who previously fronted DRAGONFORCE, TANK and I AM I.