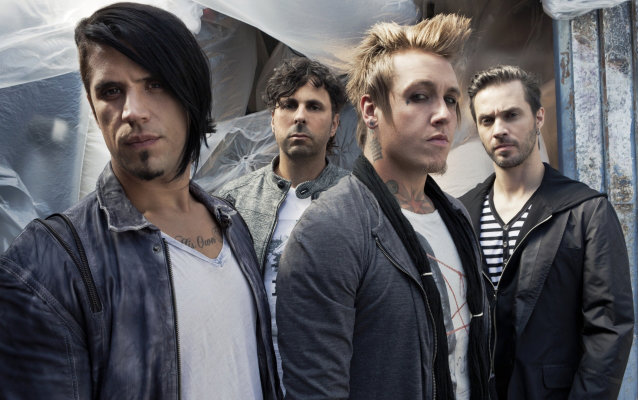 Californian rockers PAPA ROACH filmed a video for the title track of their eighth studio album "F.E.A.R. (Face Everything And Rise)", this past weekend. PAPA ROACH guitarist Jerry Horton described the experience as "tiring, painful, and dry, but totally worth it!" He added: "I can't wait for you to see [it]."

PAPA ROACH frontman Jacoby Shaddix co-directed the "F.E.A.R. (Face Everything And Rise)" video, for which he also came up with the concept. He told DutchScene: "Me and my partner from Luminous Pictures [Ezio Lucido, which] is another endeavor I'm involved in — it's a filmmaking company, but also we do music videos — this will be the first music video that I co-direct."

Horton said in an interview conducted last month at England's Reading festival that he will be publishing a book of his own photography in the near future. Horton explained, "It's in the works. I enjoy photography on an amateur level and being fortunate enough to travel everywhere, I wanna take advantage of it."

Horton added, "I don't necessarily have any sort of focus on any one particular thing; I just shoot whatever strikes me — landscapes, portraits — and somebody within our camp said, 'You need to do something with this stuff.' So we're gonna try and put out a book."

Horton also spoke about the recording process for "F.E.A.R.", revealing that the band worked with two producers, Kevin Churko and Kevin's son Kane, saying, "We did the first five songs with Kevin, the dad, and then the last seven with the son, because [Kevin] had a prior engagement with IN THIS MOMENT… It was a different sort of workflow, but we got into it and it was cool. And I think we came out with some really good stuff."

The follow-up to 2012's "The Connection", "F.E.A.R." was recorded in Las Vegas, with Horton saying, "It was incredibly dry. Each one of us had humidifiers in our bedrooms. We felt our skin cracking."

Finished shooting the video for Face Everything and Rise. It was tiring, painful, and dry, but totally worth it! I can't wait for you to see