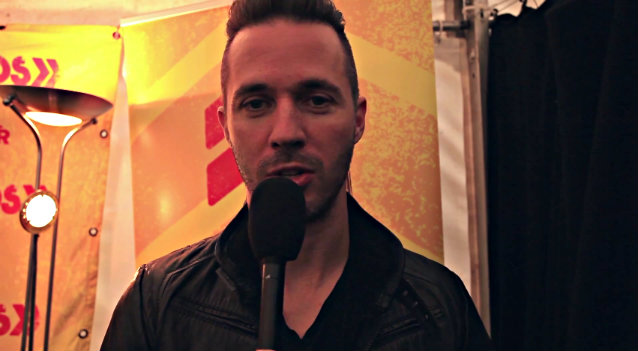 Soundspheremag TV conducted an interview with PAPA ROACH guitarist Jerry Horton at last weekend's Leeds Festival in England. You can now watch the chat below.

"We recorded it in [Las] Vegas with [producers] Kevin and Kane Churko.

"We went in kind of with the intention of making a heavy record, and there are heavy songs on there, but we can't really stop ourselves from just exploring stuff. So we have a couple of dynamic songs on there, and a couple of vibey songs, and it's sort of classic PAPA ROACH where it's kind of varied in its content and style."

PAPA ROACH frontman Jacoby Shaddix told Kerrang! magazine in a new interview that "F.E.A.R. (Face Everything And Rise)" is "probably the most positive record we've written," adding, "There's obviously been an element of hope within the despair of the music that we write, and I think that that's always key, and that's very important to what we do, is to always have that element of hope, and that's laced throughout the record."

An exact release date, and tour plans are all to be revealed later.