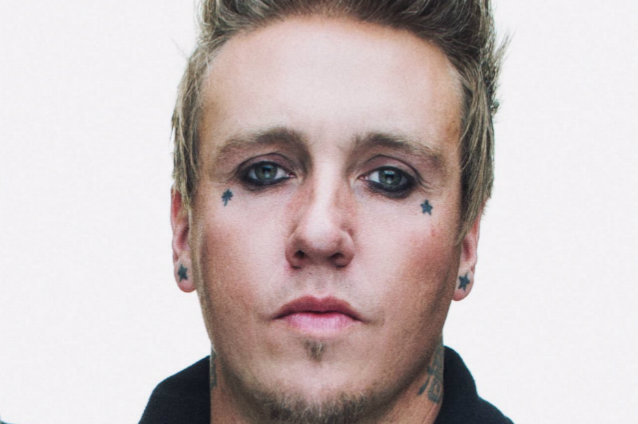 Barbara Caserta of Italy's Linea Rock recently conducted an interview with PAPA ROACH frontman Jacoby Shaddix. You can watch the entire chat below. A few excerpts follow (transcribed by BLABBERMOUTH.NET).

On whether PAPA ROACH felt "reborn" while writing and recording their new album, "Crooked Teeth":

Jacoby: "Oh yeah, definitely. We were very intentional in the process of creating 'Crooked Teeth' and what we wanted to do and what we wanted to do with the sound of the band and the visuals, music, everything. So we interviewed a bunch of producers and we just came to the band conscious that we wanted to work with young, hungry, unknown producers. Because we've worked with some of the greatest rock producers in the business. This time around, it was time to re-invent who we were and we decided to work with these two fellas named Colin Brittain and Nick Furlong. This is their first full-length rock record that they've produced. For us, our management and label thought we were crazy, but they really saw eye-to-eye with our vision with what we wanted to do. We wanted to take the classic elements of PAPA ROACH and mix them with where we are now in 2016-2017. It's a very cool clash of styles and sounds, just really brought new life to the band."

On the direct nature of his lyrics on the song "American Dreams":

Jacoby: "Music is a great place to speak your mind. For us, we just wanted to tell our truth, what I see. When we were writing the record, it was during the American elections for the presidency. It was a political shit-show. It was like monkeys throwing shit at each other and it was embarrassing. For me, it's really, the lyrics to the chorus are 'American dreams, American lies, we're trying to see through smoke in our eyes. So give me some truth, don't tell me your lies. Because it's harder to breathe when you're buried alive by American dreams.' Essentially that's saying 'We're just starving for truth over here.' Not only Americans can relate to this, but I think people from many countries all over the world in their own political climates can understand that. It's like, we just want the people in power to just be straight with us. Shoot straight with us, you know what I mean? Don't say one thing and do another thing. That goes on all the time in politics. It's kind of gross, man. I think the politicians can definitely learn from kids, to be honest. We spend a lot of our time teaching our children, like 'Share, be nice to each other,' right? We teach that to our children, but then we see the people in power 'This is mine. Stay away from it. And fuck you.' It's totally against the humanity of us. I don't know, I just see music that transcends all boundaries, borders, religions, races, it cuts through all that and goes straight to the soul and straight to the heart. I'm so grateful that's what my passion is. Passion isn't to be on the top of the political food chain, chewing other people's faces off…"

On whether he feels PAPA ROACH's breakout 2000 single "Last Resort" is their "manifesto":

Jacoby: "It's definitely a powerful song. It's not my words, but in a lot of people's words, that song has saved many lives. I'm like, it just blows me away. What if that was my only calling on this planet was to come and be part of writing that song to give some people that are struggling through their darkness some hope? Or some light? If it is, like, fuck! I won! Good job, P-ROACH. It's a classic song. I'm so grateful to have a classic song. That song still sounds fresh on the radio; it still makes crowds go crazy. People still love it. It still touches people emotionally. It's like a hand that reaches into the darkness and drags kids out. I think it's a beautiful thing. A lot of bands strive their whole career to have a song that influential or has that much impact and that was the first song we released. It was like 'Wow, fuck it! We got it all backwards!' AEROSMITH, they got 'Dream On', PAPA ROACH, we got 'Last Resort'."

On how PAPA ROACH survived the stigma of being a "nu metal" band and their secret to success: