Veteran photographer Kevin Estrada has shot some of rock's biggest names over the years, including NIRVANA, KISS, REM and GREEN DAY. Once more, he is using his connections in the world of rock for a good cause — to fight human trafficking through the celebrity charity event "Rock For Freedom" on July 28 at Lucky Strike Live in Hollywood fueled by Monster Energy.

"Human trafficking is the second largest criminal industry in the world today — second only to drug activity. This is tragically happening to hundreds of thousands of girls, and boys, every year — some of these girls are as young as 7 years old. This isn't just happening elsewhere in the world, it's happening right here in our own backyards," states Estrada.

"Rock For Freedom", a mixture of live music and celebrity bowling, will begin at 6:30 p.m. with all-star rock 'n' roll bowling teams where fans can auction to win a spot on the team and bowl alongside their favorite musicians. Some of the scheduled bowling captains include members of HOOBASTANK, Nick Carter of the BACKSTREET BOYS, legendary bass player Rudy Sarzo, current OZZY OSBOURNE bass player Rob "Blasko" Nicholson, an all-star team of classic L.A. metal legends, and lots more being scheduled. Throughout the night will be silent auctions and raffles featuring autographed guitars, skateboards, books, set lists, drum cymbals, etc. by such bands and artists as KORN, RAMMSTEIN, PAPA ROACH, BACKSTREET BOYS, DEVILDRIVER, TRIVIUM, LITA FORD, MÖTLEY CRÜE, ATREYU, SLAYER, ANTI-FLAG and more. PAPA ROACH will perform a headline set at the event, with local acts EDGE OF PARADISE and THE MENDENHALL EXPERIMENT sharing the stage.

Like Estrada's successful "Rockers Against Trafficking" previous all-star benefit show at Paladino's in Tarzana, California, the proceeds from this event will help to rebuild the lives of these young victims with housing, medical assistance, legal aid, and job placement. These donations will also be used to build and set up monitoring stations on the borders between countries that are known for human trafficking. Estrada says: "Our goal is not only to raise awareness, and to fight human trafficking here in the United States, but to contribute to the rescue and rehabilitation of its young victims."

You can learn more about the foundation and watch the PSA/TV Spot starring Nikki Sixx, Lemmy Kilmister, Nick Carter and Mark McGrath at RockersUnited.org.

Tickets are on sale now at LuckyStrikeLive.com and are very limited.

The Rockers United Foundation is a non-profit, 501(c)(3) charity founded by Estrada. All donations are tax deductible. 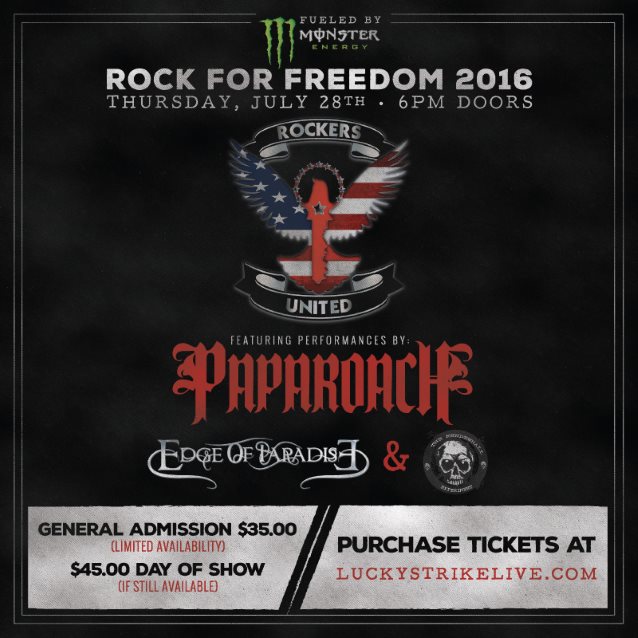