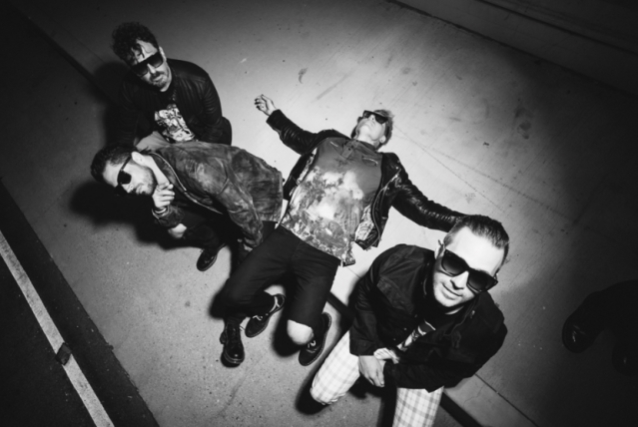 PAPA ROACH has shared the music video for "No Apologies", picking up where the band's 2017 hit single "Help" left off. The heartwarming release brings some familiar faces back to the screen to finish a beautiful story of forgiveness and love just in time for Father's Day.

PAPA ROACH singer Jacoby Shaddix commented: "Life is art. Art is life. We continue to blur the lines. The video for 'No Apologies' is an expression of love and forgiveness. A story we can all learn and grow from. I know I did. It's real. It's raw. It's life. A must-see."

Shaddix previously told Consequence that forgiveness inspired "No Apologies", saying: "I just know that when I hold those resentments and that anger inside, it's a weight that just drags me down. I wrote these lyrics to serve as a letter to my biological father. I forgive you, old man. I love you."

"No Apologies" features the lyrics: "I know you tried your best / I know you struggled. The cards that you got dealt / They gave you trouble / Now I see the you in me / And I see double."

"No Apologies" is taken from PAPA ROACH's latest album, "Ego Trip", which was released in April via New Noize Records in partnership with ADA Worldwide (WMG's independent label and artist services arm).

The seeds of "Ego Trip" were planted when the quartet entered a COVID-secure mansion in Temecula, California in the summer of 2020. What started as an escape and an exercise in keeping the creative juices flowing, in a world that had completely ground to a halt, quickly grew into something bigger. Purposeful, provocative, and just the right side of the line between confident and cocky, "Ego Trip" is PAPA ROACH — completed by guitarist Jerry Horton, bassist Tobin Esperance and drummer Tony Palermo — at its boldest and most brilliant.

"Ego Trip" is the follow-up to "Who Do You Trust?", which came out in January 2019. That disc was produced by Colin "Doc" Brittain and Nick Furlong except for the song "Top Of The World", which was helmed by Jason Evigan.