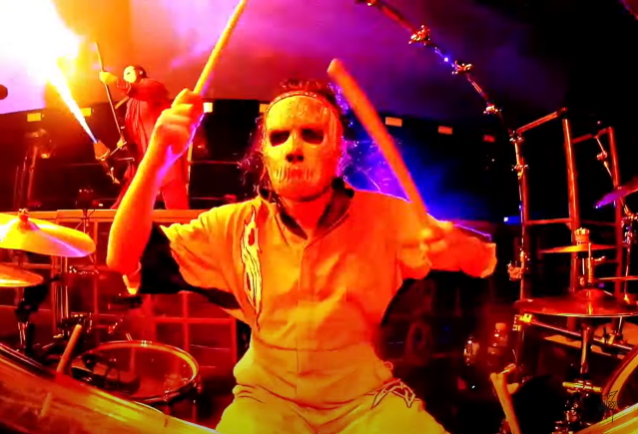 SLIPKNOT drummer Jay Weinberg has shared a point-of-view (POV) video of him performing the song "The Chapeltown Rag" with his bandmates on June 13 at Climate Pledge Arena in Seattle, Washington. The clip, which was filmed using a GoPro Hero 8 camera, can be seen below.

The studio version of "The Chapeltown Rag", which was released on November 5, 2021, was produced by Joe Barresi, who has previously worked with AVENGED SEVENFOLD, QUEENS OF THE STONE AGE and CHEVELLE, among many others.

Earlier this week, SLIPKNOT announced the fall leg of the "Knotfest Roadshow 2022" tour. Produced by Live Nation, the run — featuring support from horror-themed metal maestros ICE NINE KILLS and metalcore titans CROWN THE EMPIRE — will kick off on September 20 in Nashville, Tennessee and hit an additional eight cities before culminating in Irvine, California on October 7.

2021 marked a banner year for SLIPKNOT. Making a triumphant return to the road, "Knotfest Roadshow 2021" tour sold out amphitheaters across the country, bookended with the record-breaking Knotfest Iowa and the biggest headline show of SLIPKNOT's career, Knotfest Los Angeles at Banc of California Stadium, where they debuted their first new music in two years — the aforementioned "The Chapeltown Rag". In addition, they topped the bills of multiple, internationally renowned festivals, including Riot Fest, Rocklahoma, Inkcarceration, Welcome To Rockville and more.