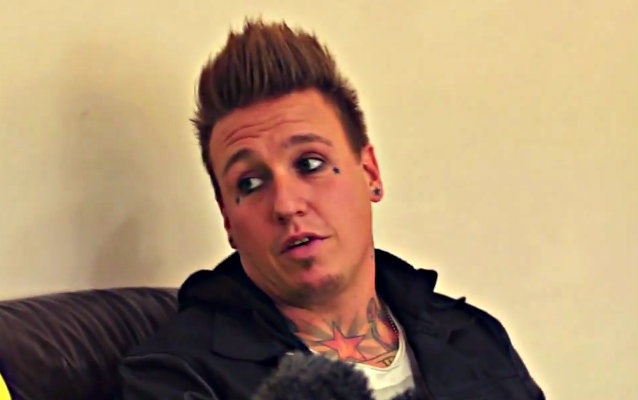 Dennis Rowehl of Entertaim.net conducted an interview with vocalist Jacoby Shaddix of PAPA ROACH in November 2013 at E-Werk in Cologne, Germany. You can now watch the chat below.

Shaddix and his wife, Kelly, are the proud new parents a baby boy, Brixton Gabriel Shaddix. Kelly underwent a Caesarean section procedure a a Californian hospital on September 17 and Brixton was born at 9:45 a.m. local time. He weighed in at 7 pounds and 3 ounces and measured 19 inches long. This is the third son for Jacoby and Kelly, who are also the parents of Makaile Ceilo Shaddix, born March 24, 2002 and Jagger Monroe Shaddix, born September 13, 2004.

During the making of PAPA ROACH's latest album, "The Connection", Shaddix split and reconciled with his wife of 16 years and also fell off the wagon.

Former PAPA ROACH drummer Dave Buckner reunited with the band at the Aftershock festival in Sacramento on September 14. Buckner took the stage at Discovery Park to perform "Last Resort" with his former bandmates.