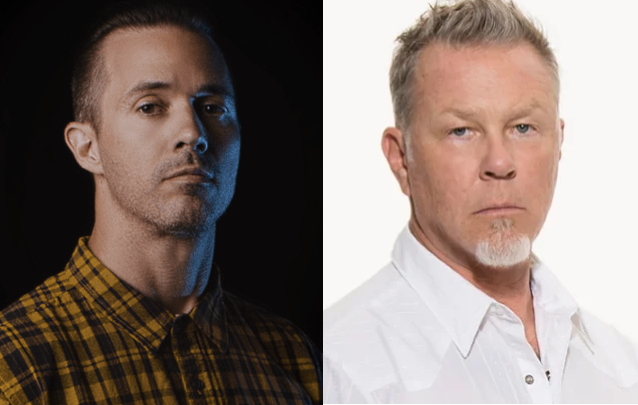 PAPA ROACH's Jerry Horton has revealed to Premier Guitar that METALLICA's "…And Justice For All" was the song that got him into playing guitar. He recalled (as transcribed by BLABBERMOUTH.NET): "I remember I was in Indiana — in a small town in Indiana — visiting my grandparents. And I had an acoustic guitar and I had just picked it up. And I was into METALLICA. Everyone around me was more into, like, AC/DC and more classic rock. But METALLICA was new for me at [the] '…And Justice For All' [album]. And I was just learning. And I had my acoustic guitar. And that riff was simple enough in the beginning — the intro riff — and sound enough like an acoustic that I worked on trying to figure it out. And I remember that 'aha' moment. I was at the park down the street and started playing it and then along with it; I had my Walkman. And even with the acoustic, just still riffing the loud parts, I was just feeling like I could be up on that stage and rocking out like that. I'll never forget it. It was a blast. And it really just set me on that path to really try and figure out as many of the songs that I loved and try to do my own thing."

Horton previously discussed METALLICA's influence on his playing in an interview last month with Radioactive MikeZ, host of the 96.7 KCAL-FM program "Wired In The Empire". At the time, he said about METALLICA guitarist/vocalist James Hetfield: "It's crazy how powerful his hands are. We did a festival with [METALLICA] in 2014. We were lucky enough to be on the side of the stage kind of hovering above it. And even though we were behind the P.A., you could hear his guitar over almost everything else. And I know that it's not a mix thing because that's not how mixers work. But it's so powerful that it just cuts through everything. And his writing abilities are just insane."

Two months ago, PAPA ROACH and FALLING IN REVERSE kicked off a co-headlining U.S. tour. Dubbed the "Rockzilla Summer Tour", the bill also included HOLLYWOOD UNDEAD and BAD WOLVES. The trek launched on July 27 in East Providence, Rhode Island, with dates booked in 24 cities across the U.S. before a final show on August 31 in Nashville, Tennessee.

After two years of work and nearly 10 months of building up excitement with fans, PAPA ROACH recently celebrated the release of its 11th studio album, "Ego Trip". An album that sprouted almost by mistake in the throes of a global lockdown, its seeds were planted when the quartet entered a COVID-secure mansion in Temecula, California, in the summer of 2020.

PAPA ROACH are two-time Grammy-nominated, platinum-selling leaders in alternative hard rock music, who in 2020 celebrated the 20th anniversary of their iconic album "Infest".