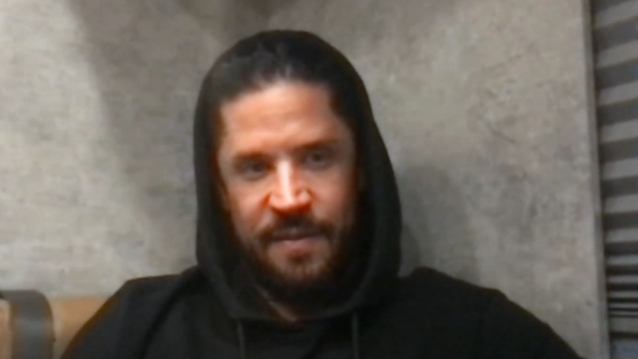 PAPA ROACH bassist Tobin Esperance spoke to the Z93 radio station about how he and his bandmates manage to stay motivated to write new material nearly three decades into the group's existence.

"Really what it comes down to is feeling just really grateful that throughout our whole career we've stayed inspired and excited about making music," he said (as transcribed by BLABBERMOUTH.NET). "Whether it's a number one song or not, it's just, like, okay, if people like the music, that's that extra bonus, but just the fact that we're excited to jam and write new songs… We're not one of those bands who just wants to kind of regurgitate the same stuff and live off of the success of the early hits or whatever. Just the fact that we still have fun making records, writing new songs and touring after all these years is pretty wild. And I'm still there — I'm already thinking about what we're gonna do next. I'm really excited to get in the studio and make some new [songs], which I'm hoping to do this year — the end of this year."

Last month, PAPA ROACH and FALLING IN REVERSE kicked off a co-headlining U.S. tour. Dubbed the "Rockzilla Summer Tour", the bill also includes HOLLYWOOD UNDEAD and BAD WOLVES. The trek launched on July 27 in East Providence, Rhode Island, with dates booked in 24 cities across the U.S. before a final show on August 31 in Nashville, Tennessee.

After two years of work and nearly 10 months of building up excitement with fans, PAPA ROACH recently celebrated the release of its 11th studio album, "Ego Trip". An album that sprouted almost by mistake in the throes of a global lockdown, its seeds were planted when the quartet entered a COVID-secure mansion in Temecula, California, in the summer of 2020.

PAPA ROACH are two-time Grammy-nominated, platinum-selling leaders in alternative hard rock music, who in 2020 celebrated the 20th anniversary of their iconic album "Infest".

"Ego Trip" is the follow-up to "Who Do You Trust?", which came out in January 2019. That disc was produced by Colin "Doc" Brittain and Nick Furlong except for the song "Top Of The World", which was helmed by Jason Evigan.