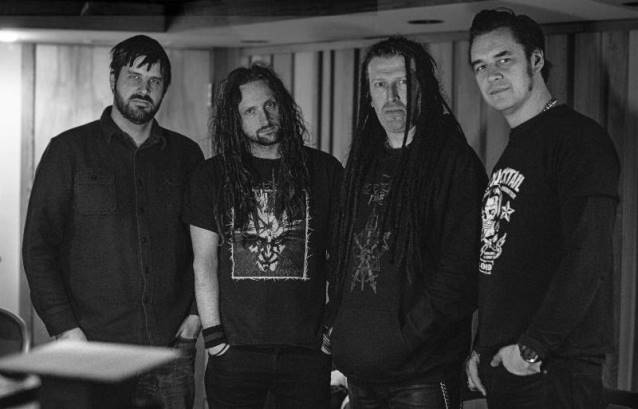 VALLENFYRE, the new U.K. death metal band featuring Gregor Mackintosh, songwriter and guitarist of PARADISE LOST, alongside members of MY DYING BRIDE, AT THE GATES and DOOM, has entered GodCity Studio in Salem, Massachusetts with producer Kurt Ballou (CONVERGE, BLACK BREATH, NAILS) to begin recording its sophomore album, "Splinters", due in April via Century Media Records.

In 2011, Mackintosh announced that he would go back to his death metal roots with his new band, VALLENFYRE. The level of expectation was set high with a lineup consisting of Hamish Glencross (guitar; MY DYING BRIDE),Scoot (bass; DOOM, EXTINCTION OF MANKIND),Adrian Erlandsson (drums; AT THE GATES, PARADISE LOST, THE HAUNTED) local friend Mully (second guitar) — and, of course, Gregor on vocals (for the first time in his career!). Their debut, "A Fragile King", was a reference to Gregor's father's (lost) battle with cancer; the harrowing, crusty death-doom found on the album was hailed as "a beast of a record" (Terrorizer) and "a sonic force that bites deep and hard" (Decibel). Simply put, "A Fragile King" is "old school to the bone" (Rock Hard).