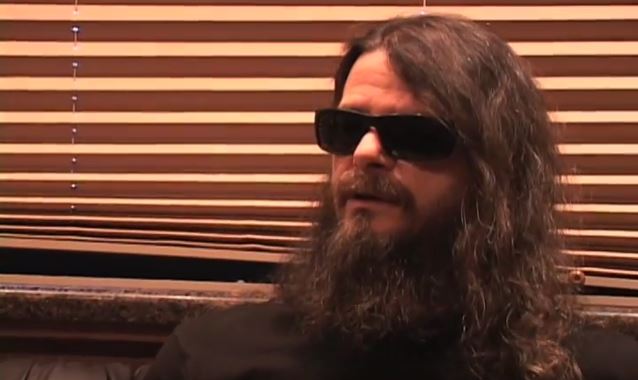 PAUL BOSTAPH: If GARY HOLT Contributes Music To Next SLAYER Album, 'It's Gonna Be Nothing But Crushing'

On July 31, Robert Williams of Metal-Rules.com conducted an interview with SLAYER drummer Paul Bostaph in San Antonio, Texas. You can now watch the chat below.

Speaking about what's like to be playing with SLAYER guitarist Gary Holt after previously recording and touring with Holt as a member of EXODUS, Bostaph said: "It's great jamming with Gary [in SLAYER]. I mean, it was great jamming with him in EXODUS too. I mean, I've known Gary over the years from being involved in the San Francisco thrash metal scene. And I say this every time, but it's just 'cause it makes sense… When I rejoined [SLAYER], it wasn't like, you know, [I was gonna play with] Kerry [King, guitar] and Tom [Araya, bass/vocals] and then some guy I didn't know. Obviously, we don't have Jeff [Hanneman, late SLAYER guitarist] with us anymore. So when we got together, it was like we were already a band. I know Kerry and Tom, and throughout the years, I know Gary as well, so the chemistry was already there."

Asked what he thinks Holt will bring to the table if he ends up contributing to the songwriting process for SLAYER's follow-up to this year's "Repentless" album, Bostaph said: "Oh, I mean, c'mon! It's Gary Holt. I mean, look, if Gary contributes, it's gonna be nothing but crushing and heavy. Kerry's doing a fantastic job [writing music for SLAYER on his own]. [But] this band has always had two guitar players that have written. So, I hope if Gary gets involved in it, him and Kerry work together on some stuff, [because] it could really make for some really crushingly heavy music."

Regarding whether he thinks Holt's input will add a new dimension to SLAYER's sound, Bostaph said: "Without a doubt. Anytime you take away a player, or add a player in an ensemble situation, you're adding a new dynamic. You're taking a dimension away, [and] you're adding a new dimension. It depends on the strengths and the weaknesses of the individual you are taking in and putting out. But, I mean, with Gary… Gary was there in the beginning of thrash metal; EXODUS was one of the bands that started it. So, that being said, METALLICA, SLAYER, ANTHRAX, you know… EXODUS, MEGADETH… You know, those guys are on the forefront of who started it, [and] Gary's right there. So, without a doubt, if he writes anything for the next [SLAYER] record at all, it's gonna be something that… it's gonna be killer, because he gets it."

"I would have loved for Gary to have been more involved with writing," King explained to LA Weekly. "I thought a long time about this, but I didn't think SLAYER fans were ready for that yet. Even though Gary's a household name in thrash, I didn't feel that the first SLAYER record without Jeff should have Gary Holt contributing as a writer."

"Repentless" will be released on September 11 via Nuclear Blast.