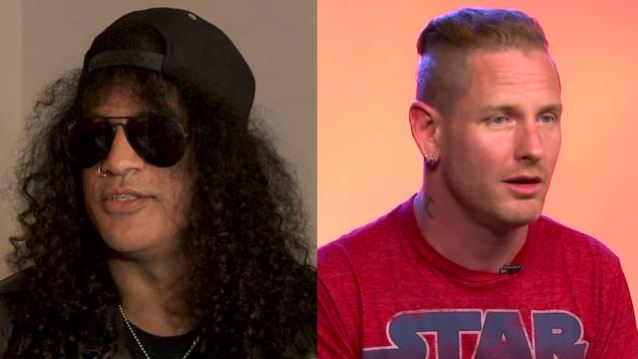 Will COREY TAYLOR's Recordings With VELVET REVOLVER Ever See Light Of Day? SLASH Weighs In

Speaking with Canadian rock journalist Mitch Lafon, Slash confirmed that Taylor recorded as many as 10 songs with VELVET REVOLVER, saying (hear audio below): "Corey came in, just like a lot of other guys came in. Of course, Corey's Corey, and he's probably one of the best guys out there. I love Corey. I just thought it was a different style than what VELVET REVOLVER was trying to capture. But, still, the songs are cool. But if we were gonna do anything with that, they would have to be re-recorded and… 'Cause, I mean, it was very raw and very, sort of, 'making it up on the spot' kind of deal. And so we'd have to revisit everything and then we'd put it together, I think. But that's not really a plan. I'm just saying if it was… I don't wanna get any ideas in anybody's head. That would be the only way that it could be released, [and] I'm not saying that it's going to."

Slash also talked about the current status of VELVET REVOLVER. He said: "Well, it's an active project, let's put it that way. It's been a matter of trying to find the right guy to front that unit, which is difficult, because, as we move down the road in the millennium, the style of rock singers is changing a lot. And I think that with the [musical vision] that Duff [MacKagan, bass] and Matt [Sorum, drums] and Dave [Kushner, guitar] and I have for VELVET REVOLVER don't really cater to the sort of stylistic vocals that are happening as we move down the road from, I think, it was 2008, was the last thing we did — 2008 up until the present. I mean, I was really fortunate to find Myles [Kennedy for my solo band], and it was really a great thing that we just sort of locked in. But, yeah, trying to find a really genuine, honest rock and roll singer is getting few and far between."

Taylor told Loudwire about his VELVET REVOLVER collaboration: "There was a handful [of songs] that we wrote, and then there was a handful that I kind of rearranged a little bit based on music that they already had. I think there was three songs that we wrote together, which were actually pretty sweet. And then the rest of it was me writing to music that they already had that I thought was pretty cool."

Taylor added: "The world will probably never hear 'em, which is fine, because, I mean, I would want another crack at kind of working on some of that stuff anyway. But that will never happen, so it's…. You know, it's all good."

Ultimately it was Slash who ruled against Taylor joining the band, saying that the combination "didn't have certain elements I thought it needed," but adding that Taylor came "the closest so far."

VELVET REVOLVER has never found a new singer following its April 2008 split with Weiland and is more or less on hiatus, although it reunited with the former STONE TEMPLE PILOTS frontman for a short one-off performance at a benefit concert in January 2012.