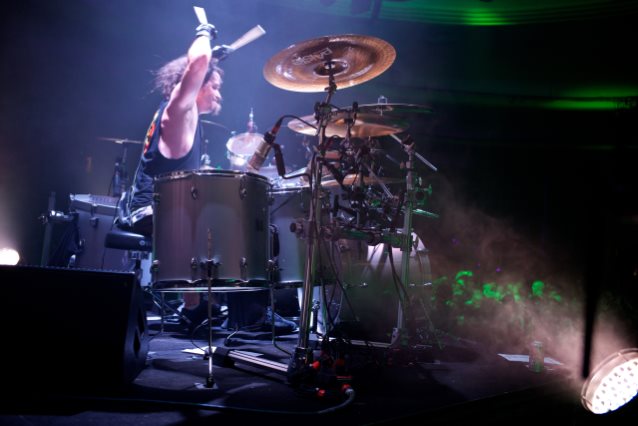 SLAYER drummer Paul Bostaph spoke to The Bemidji Pioneer about the band's six-week summer tour, which kicks off this coming Wednesday, July 12 in Bemidji, Minnesota.

"If you really want to see a very intense environment, in terms of people getting into it and lots of intense energy, you're going to get that from our show," Bostaph said. He added that he went to his first SLAYER concert in 1989. "I went to go watch not knowing what to expect, and then after I saw that... I was dying to go back," he said. "As a musician, as a fan, there are certain bands that deliver a certain energy. And a SLAYER concert is going to be high-energy, relentless, nonstop, no BS… It's just head down, go for it. It's an athletic event."

Bostaph added that three and a half decades into the band's career, the members of SLAYER are enjoying being on stage more than ever.

"When you're young and you're doing that and you're up there... every day you're getting ready for war," he explained. "When you're older, it's like, I still want to crush, but you kind of know you already can, so you're more confident in that. You don't take it for granted... but you just have more fun."

Support on SLAYER's summer tour will come from LAMB OF GOD and BEHEMOTH.

SLAYER is continuing to tour in support of its latest album, "Repentless", which debuted at No. 4 on The Billboard 200, having shifted 50,000 equivalent album units in the week ending September 17, 2015.